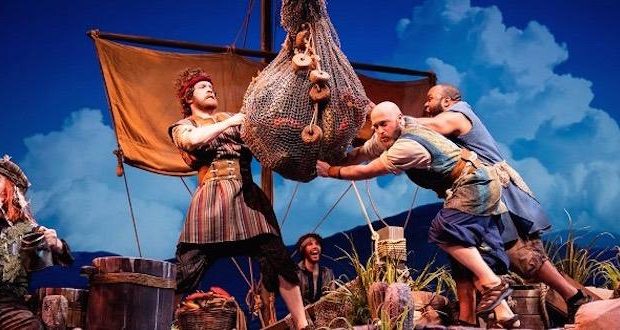 'Jesus' may come to Branson, Missouri in the future.

The first time someone invited me to a Sight & Sound Bible-based theatrical production – which would have required flying across the country and taking time away from my regular life – I declined. Why would I do that? My own town has plays and musicals!

But a few years later, when my travels found me near a Sight & Sound theater, I relented and took in a show. And I finally understand what the fuss was all about.

With special effects, monstrous sets, live animals and a panoramic stage the width of a football field, a Sight & Sound production was unlike anything I had ever seen. It’s so massive that it takes more than three years — from concept to opening night — to put one together. It’s also so elaborate that there are only two of them: one in Branson, Mo. and the other in Lancaster, Pa.

Which brings me to the company’s latest production, “JESUS,” which is Sight & Sound’s first full-length production about Christ’s life and is showing in Lancaster this year and Branson next year.

“JESUS” features cutting-edge technology and a bigger-than-ever set but also an emotion-laden story that will captivate audiences. It’s spectacular.

Writer Kristen Brewer had a tall task to trim the content of four Gospels down to a script that would fit within 2.5 hours and stay true to Scripture. To accomplish that, she concentrated on individual stories of lives changed by Christ – the calling of Peter as a disciple, the challenge to Nicodemus’ legalistic beliefs, the forgiveness of Mary Magdalene, the healing of the blind man, and the casting out of demons from the man named Legion.

Throughout the show, we’re treated to sights and sounds we’ve never seen in a, well, Sight & Sound show. “JESUS” is the first production to feature the new 12-ton LED screen that’s 113 feet wide and nearly 30 feet tall. It serves as a colorful backdrop to nearly every scene but – as it should – never distracts from the story. I forgot it was there. The production also includes the largest moving set piece in Sight & Sound history – a recreated Galilean Hillside that’s 100 feet wide and 15 feet deep. Oh yeah, we get to see Jesus and Peter walking on water, too.

Of course, we also get to enjoy powerful music, special effects and live animals. (By my count, five types of animals – doves, horses, camels, goats and sheep – either flew over the audience or walked down the aisle.)

At one point I wrote in my notes: “It’s tough to determine what is the most impressive scene.”

“JESUS” ends with the story of Jesus’ death, resurrection and ascension and of Peter’s preaching the Gospel.

The show is powerful — I cried three times, if you’re curious – and left me wanting more. It does take a few liberties with the dialogue, but no more than we saw in The Bible TV miniseries.

“JESUS” will run through Jan. 5. While there are no current plans to bring it to Branson, fans of Sight and Sound can wait and see what the future holds.

And if you go, you’ll understand what the fuss is all about.

Michael Foust covers entertainment from a Christian perspective and is the father of four small children. Visit his blog: MichaelFoust.com

Read our review of Wicked.

Previous: Ancient hiding place for Christians found in Syria
Next: 5 Big Questions Every Graduate Should Ask