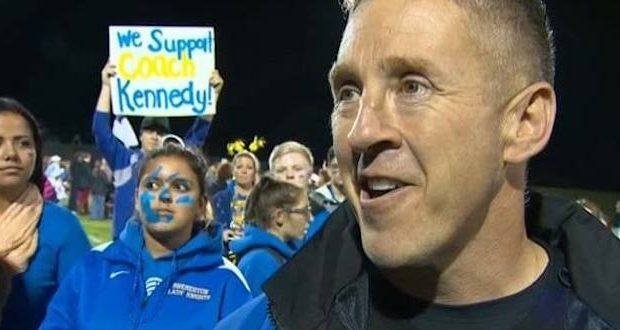 Critics continue to blast “Sports Illustrated” magazine for an opinion piece it published about a pending U.S. Supreme Court ruling about the right of a high school football coach to pray.

Joe Kennedy, former head coach of the Bremerton, Wash., High School football team, made national headlines when he was fired in 2015 for praying on the 50-yard line and allowing students and community members to join him. As a result, Bremerton School District and Kennedy have volleyed back and forth in the courts for years, with the case finally reaching the U.S. Supreme Court.

The article, which seems to cast Kennedy in a questionable light, contains paragraphs such as this:” It’s hard to read that sequence as anything other than performative, a plea for the exact kind of attention likely to add sympathetic supporters to his side. His opponents argue he got exactly what he wanted. But Kennedy says `uh-oh’ flashed through his mind that night. Here, and in many other places, skeptics describe his framework as convenient, nifty bits of PR spin. Regardless, the coach makes for an unlikely figurehead in these legal theatrics. He was aimless for most of his 53 years. For decades, he wasn’t religious at all, and he isn’t overtly so now. He never followed football all that closely.”

The story called a potential ruling in Kennedy’s favor “an erosion of a bedrock of American democracy.” The comment appears to be predicated upon the notion that a win for Kennedy would somehow harm the nation — something critics seized upon.

First Amendment attorney Casey Mattox was among those who responded, writing, “Actually, no. It is not an erosion of a bedrock of democracy if the government can’t punish people for praying. This is a bad take.”

Despite warnings about the separation of church and state supposedly being knocked down under a Kennedy win, First Liberty Institute special counsel Jeremy Dys, who represents the former coach, said he believes people soon will learn Kennedy was in the right.

“I think we’re going to learn at the end of the month just how far the Constitution protects his rights,” he said.

Previous: ‘Ain’t Too Proud’ brings The Temptations to life
Next: Original Juneteenth was a spiritual event and the church can still play a role today