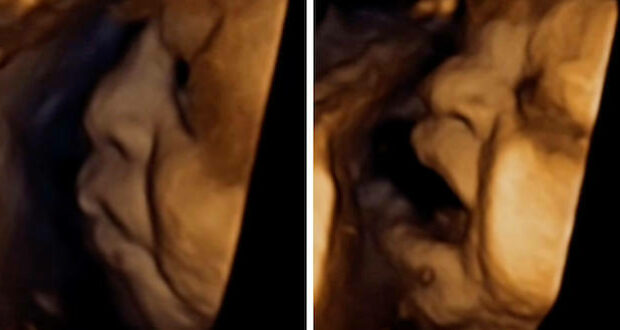 Do preborn babies feel pain? A new study has proven that unborn babies receiving an anesthetic injection exhibit changes in facial expression similar to newborn babies experiencing pain. The case involved a preborn child who was about to undergo intrauterine surgery.

The study, published at the end of last month by a team of researchers in Brazil, ‘Sorting pain out of salience: assessment of pain facial expressions in the human fetus,’ found a difference in response between preborn babies exposed to a painful stimulus (an anesthetic injection) and those who were not.

Fetal facial expressions were recorded before and after stimulus

The recordings for each group were anonymized and reviewed by “2 blinded researchers who independently scored the facial pictures of each fetus using the Neonatal Facial Coding System” (NFCS) which monitors ten items of facial expression in neonates to evaluate the degree of pain experienced. These items include: brow lowering, eyes squeezed shut, deepening of the nasolabial furrow, open lips, horizontal mouth stretch, vertical mouth stretch, lip purse, taut tongue, tongue protrusion, chin quiver, neck deflection, and yawning. (These last two items were added specifically for this research on the unborn).

Each of these items was given 1 point if present and zero if absent. “The product of the screenshot assessment was a single score (between zero and 12) for each fetus.” In the final results, a number of items on the NFCS were removed so that the facial features analyzed included: (1) “brow lowering,” (2) “eyes squeezed shut,” (3) “deepening of the nasolabial furrow,” (4) “open lips,” (5) “horizontal mouth stretch,” (6) “vertical mouth stretch,” and the newly added item, (7) “neck deflection”.

Out of these seven features, the study found that “no control fetus scored higher than 4, while in the AP [acute pain] group, no score was less than 5”.

The paper concludes: “our data indicate AP [acute pain] group participants exhibited an acute nociceptive-related [pain-related] facial response, that may have been experienced as pain”.

The paper does acknowledge that “pain cannot be inferred from” facial expression alone. “So, it must [be] pointed out that what was measured in the AP group is not pain per se, but, instead, the acute facial expression responses after a clear noxious stimulus”.

However, the paper also admits that while this is not definitive proof that the baby in the womb, at least at this stage of development, is capable of feeling pain, the “inability to communicate does not negate the possibility that a human […] experiences pain” and that the “acute nociceptive-related [pain-related] facial response […] may have been experienced as pain”.

The evidence gathered in this study coheres with the increasing evidence that the unborn can experience pain. Last year, a large number of elected British officials attended a Parliamentary webinar hosted by the All Party Parliamentary Pro-Life Group (APPPG) to discuss the evidence indicating that the unborn baby may feel pain from as early as 12 weeks’ gestation.

Parliamentarians from across the political spectrum heard from John C. Bockmann PA, a U.S. Army physician assistant and member of the Conner Troop Medical Clinic at Fort Drum, New York, and Dr. Stuart WG Derbyshire, an Associate Professor in Psychology at the National University of Singapore.

The two recently collaborated on the Journal of Medical Ethics article ‘Reconsidering Fetal Pain’. Though they hold ‘divergent views regarding the morality of abortion’, they approach the issue of fetal pain based on recent scientific and medical developments.

Both Derbyshire and Bockmann believe there is “good evidence” that the brain and nervous system, which start developing at 12 weeks’ gestation, are sufficient for the baby to feel pain. In their study, they argue that women considering abortion at this stage of pregnancy should be told about the pain their unborn baby could experience while being terminated.

Currently, the use of fetal pain relief in the UK is not required by law or advised in official NICE (National Institute for Health and Care Excellence) or RCOG (Royal College of Obstetricians & Gynaecologists) guidelines.

Right To Life UK spokesperson, Catherine Robinson, said: “There is increasing evidence that many babies in the UK are experiencing pain during abortions”.

“As this paper is keen to emphasize, the facial expressions seen on the unborn after undergoing an anesthetic injection into their thigh is not direct proof that pain is experienced. This is in large part due to how pain is defined and the subjective nature of pain – not just for the unborn of course, but for all sentient beings. Nevertheless, the ordinary means by which we detect that another is in pain is through their outward expressions, whether facial, verbal or otherwise. That an unborn child would exhibit similar facial expressions to a neonate when subjected to a similar painful stimulus is indeed yet more powerful evidence of the likely suffering that these unborn children are undergoing”.

“Of course, the likely suffering experienced when receiving an anesthetic injection is a regrettable necessity given the surgery they are about to undergo. We can only imagine how it is possibly much worse for babies who are given a lethal injection of potassium chloride to their heart in a late-term abortion. This is the same chemical used to execute inmates in the US. The administration of potassium chloride in executions is considered so painful that it is considered necessary to first administer an anesthetic before its use in state executions.

“In the recordings of these babies, the reaction to the painful stimulus is immediate and obvious. This research is essential to the pro-life movement as it could do so much to help further highlight the humanity of the unborn child”.

“Right To Life UK recently reported that abortion was the leading cause of death in 2019, with an estimated 73.3 million abortions taking place worldwide. Sadly, this shocking figure does little to move the hearts of abortion supporters. Perhaps, though, clear examples of fetal distress and pain, as seen in this experiment, might do so.  Statistics don’t bleed, but people do, so let’s hope that these images will provide the humanity behind the numbers to prompt the societal change of mind on abortion that we so desperately need”.