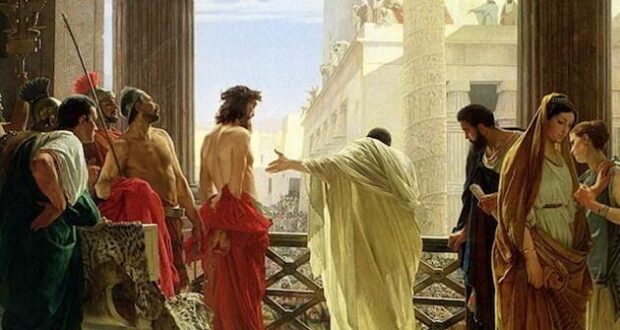 Pontius Pilate speaks to the crowd.

The killing of Jesus and the defeat of corruption 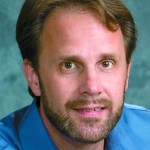 The Merriam-Webster dictionary states corruption as, “dishonest or illegal behavior especially by powerful people.”  Further, it is described as a departure from the original, purest form.  Mankind had its original, purest form in the Garden of Eden, the home of the first humans, Adam and Eve.  But something happened in that Garden which forever changed the future of all humanity.

The heart of human beings became permanently altered through the introduction of the principle of sin.  From that day forward every human was born with a corrupt heart.  And as people built and occupied places of power, corruption naturally followed.  This is still true today.  One does not have to dig long before corruption is found somewhere in the workings of religion, government, business, media and other arenas as well.

How does this relate to Easter?  Religious and political corruption were the seedbed of Jesus’ death.  The story of the cross of Christ is the most egregious form of corruption in world history.  One of Jesus’ leading disciples rightly and publicly, accused the Jewish religious leaders along with some members of the public, of their illegal actions, forcefully stating “. . . you denied the Holy and Righteous One . . . you killed the Author of life . . .” (Acts 3:14,15)

Jesus was not a victim of this corruption by any means though.  Being God, He knew the thoughts of His enemies, who believed they were secretly plotting out their conspiracy against Him.  He knew every detail of their plans in advance and possessed evidence of it all. For He was the most intelligent, skilled and wisest man who ever lived.

How did Jesus respond?  Did He call His followers to rise and defend Him?  Did He flex His supernatural powers and strike dead all His accusers with a word or motion of His hand?  First, Jesus’ perspective was not from the view of temporal, earthly or mortal understanding.  He saw events from the view of heaven, eternity and the immoral condition of the human heart.  Second, He chose the greatest weapon in His divine arsenal to fight with – truth.  The Scriptures have a synonym for this, the “sword of His mouth.”  Read the story of Jesus’ betrayal, arrest, trial, torture and death.  Whenever corruption reared its ugly head, Jesus humbly and skillfully wielded the sword of truth.  Third, He knew His divine and invisible Father had a plan that was being carefully carried out under His watchful eye.  He entrusted His very life to His all-powerful and loving Father.

READ: How to find peace in a divided nation

His followers though were confused and disillusioned.  They did not understand.  On Friday morning, while still alive, Jesus’ body was nailed to a wooden cross.  Hours later He died.  Then He was buried where His lifeless body lay sealed in a tomb.  “It’s over,” they thought.  It did not make sense.  On Saturday He still lay dead in a tomb.  Had the corrupt practices of men defeated the King of Kings?  Was evil and lawless scheming awarded victory over the Son of God?  Absolutely nothing made sense . . . until Sunday morning.

As the sun slowly inched above the landscape and its beams shot across the horizon, some women came to the tomb of their Teacher weighed down with grief.  As they approached, the ground shook violently.  Then suddenly, an angelic being appeared sitting atop of Jesus’ tomb.  It had been rolled away!  The angel told the women, “[Jesus] is not here, for he has risen . . . Come, see the place where he lay” (Matthew 28:6).

He had risen!  The corrupt schemes of men had been defeated, and the religious and political leaders were left powerless to cover up history’s greatest miracle.

In every nation on earth, in nearly every group or organization known to man, lawlessness, deceit and wickedness is present at some level.  How shall we live in times like these?  Just like Jesus.  Let us fight lies with His sword of truth.  Immorality with His Spirit of holiness.  Anger with His love.  Arrogance with His humility.  Human cleverness with heaven’s wisdom.  Worldly urgency with Godly patience.

A prayer for you – “Lord God, open our eyes and let us see there is nothing new among the children of men and women.  Injustice and corruption have existed since nearly the beginning of time, but through Jesus’ death and resurrection, we can overcome.  Let us rejoice in the face of darkness because you have risen.  Let us be willing to lay down our lives in this battle with evil, while taking up the weapons of truth, holiness and love. In Jesus name. Amen.”

Previous: Border agency deletes news it captured suspected terrorists at border
Next: Missouri and Kansas will not require vaccine passports 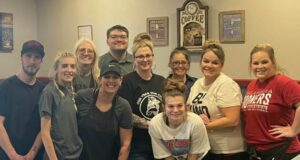 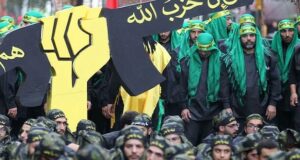 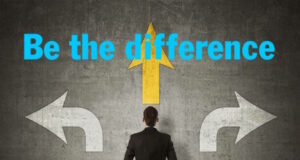 A New Year Commitment to Excellence 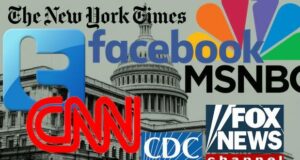 2021: The year of mistrust and suspicion