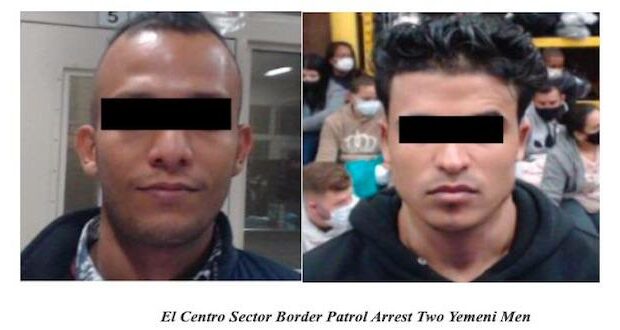 The Biden administration is being admonished for deleting an official document regarding the arrest of two suspected terrorists from Yemen who crossed the U.S. border with Mexico. The Department of Homeland Security (DHS) now says the letter was deleted because it contained “sensitive” information.

Customs and Border Protection (CBP), which is part of the agency which has now been filled with Biden appointments, announced on Monday that two Yemeni nationals who are on the FBI’s Terrorism Watch List and the No-Fly list were captured at the border.

But the press release announcing the apprehensions was soon scrubbed from the agency’s website.

The deletion was noticed by a number of members of Congress, who questioned why it had happened.

“Why is President Biden’s administration removing previously public information that more individuals on the terrorist watch list were apprehended at the border?” Rep. Bill Long (R-Mo.) said in a tweet.

Republicans on the House Homeland Security Committee tagged both DHS and CBP on Twitter, saying: “Why did you take down your previously public tweet & press release announcing that two people on the terror watch list were apprehended exploiting President Biden’s open border policies? Transparency in name alone is not transparency.”

The top Republican in the House of Representatives wants a classified briefing from intelligence officials after the Biden administration disclosed that two Yemeni nationals on the FBI’s Terrorism Watch List were apprehended at the U.S.-Mexico border.

The capture of suspected terrorists “highlights the ongoing national security risk posed by the border crisis,” McCarthy wrote to the officials.

McCarthy and other House Republicans traveled to the border in southern Texas to witness the surge in immigrants and the strain that has been placed on holding facilities as a result. They were given a tour by Border Patrol agents and briefings on the situation in El Paso.

During the briefings, agents told legislators that they had apprehended individuals from a slew of countries, including China, Iran, Yemen, and Turkey. Agents said that some were on the Terrorism Watch List.

“These revelations were shocking and concerning, and for those reasons, I felt compelled to share them with the nation,” McCarthy said.

The risk at the border is compounded by some 1,000 illegal crossers evading capture each day, in addition to the approximately 5,000 being apprehended, McCarthy wrote in the new letter.

“While I am grateful to the Border Patrol for doing all they can, I have great concern about the number of bad actors that have escaped arrest and are residing in the United States,” he said. “We simply have no way of knowing if other terrorists have crossed the border undetected.”

Previous: Why an attempted coup in Jordan is ‘bad news’ for neighbor Israel
Next: The killing of Jesus and the defeat of corruption