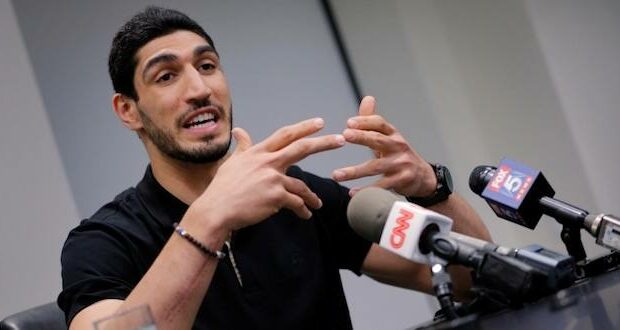 “I will bring the team toughness, post moves, rebounding, everything. I will try to do everything to make it to the playoffs,” a young Enes Kanter Freedom stated after becoming the third overall pick in the 2011 NBA draft.

He’s a walking example of a scrappy big-man player, but his efforts go far beyond the basketball court. Freedom is one of the most outspoken basketball players and athletes at the professional level when it comes to activism, standing up for religious freedom and the oppressed. Lately, he’s been one of the few professional athletes willing to criticize China for its treatment of Christian and Muslim religious minorities.

In November 2021, Freedom became a citizen of the United States and legally changed his name to “Enes Kanter Freedom.” In an interview with CNN, he referred to his new name as a reflection of his lifelong fight for freedom, saying “Freedom is the greatest thing a human being can have. That’s why I wanted to make that word a part of me and carry it wherever I go.” Now in his 11th season in the NBA, the Boston Celtics center continues to play hard on the court and fight for the oppressed off the court.

Born in Zurich, Switzerland, to Turkish parents, Freedom is a practicing Muslim who was raised in the Gulenist movement led by exiled Turkish leader Fethullah Gulen. Freedom attended Hizmet schools in Turkey, which are run by the Gulen movement. And Fethullah Gulen, who lives on a private compound in Pennsylvania, has been a personal friend and mentor to Freedom.

Turkish President Recep Tayyip Erdogan sees Gulen as a political rival and has sought to paint Gulenist Turks such as Freedom as revolutionaries and would-be terrorists who are trying to run a shadow government and overthrow Erdogan’s government. That context makes Freedom, one of the most famous Turkish celebrities, an enemy of the Turkish state.

After his family moved back to Turkey, Freedom started his professional basketball career at age 16 as a swinger for Turkish sports club Fenerbahce’s youth and senior teams. During his time with the club, Freedom made four appearances in the EuroLeague and five in the Turkish Super League before leaving for the United States. Freedom’s professional experience and contract with Nike prevented him from playing at the high school and collegiate levels in the United States. Upon his arrival, Freedom attended Findlay Prep in Henderson, Nevada, and then Mountain State Academy in Beckley, West Virginia, unable to play for both schools. His lone high school season came when Stoneridge Preparatory School in Simi Valley, California, gave him a spot on their roster.

Freedom verbally committed to play for the University of Washington Huskies in November of 2009. However, in 2010, he signed his national letter of intent to play for the University of Kentucky Wildcats after reopening his recruitment. Once again, his professional experience worked against him. According to ESPN, The NCAA ruled Freedom permanently ineligible for exceeding the eligibility limit by $33,000 while playing for Fenerbahce. As result, Freedom was unable to step on the hardwood as a member of the Wildcats, but he decided to remain in Lexington while preparing for the NBA draft under coach John Calipari’s mentorship. Freedom was selected by the Utah Jazz as the third overall pick in his draft class.

Since his entrance to the NBA, Freedom has played for five of the league’s teams; the Utah Jazz, Oklahoma City Thunder, Portland Trailblazers, New York Knicks and his current team, the Boston Celtics. Freedom has also used his status as a platform to spread awareness about the oppressive realities in his home country, Turkey, as well as China and the United States.

Freedom’s conflict with and displeasure for the Turkish president has always been open to the public. In 2013, Freedom spoke against Erdogan for his oppressive behavior of arresting journalists, censoring the press, preventing peaceful protests and punishing any individual or group that speaks against him or his administration.

In 2017, Freedom spoke about an incident in Washington D.C, where peaceful protestors outside the Turkish Embassy were violently attacked by security. Freedom’s status as an NBA player did not prevent him from receiving threats and harassment from Erdogan supporters after his act of bravery. The Turkish government would later call Freedom, who was on a trip to Indonesia, a “threat to the country” before revoking his passport. As a result, Freedom was detained in a Romanian airport for hours before being allowed to depart.

In May 2017, Freedom told CBS This Morning that he received death threats almost every day. And in October 2019, he tweeted a video of himself being harassed by his own countrymen outside a mosque in Boston while trying to enter with his Celtics teammate Tacko Fall. That same year, Freedom skipped the NBA Global Games in London in fear for his safety.

Freedom’s father, Mehmet, was also arrested in 2013 for terrorist accusations. He was released on Jun. 19, 2020, seven years later. Freedom believed his own activism helped gain his father’s release. “Wow! I could cry,” Freedom tweeted. “Today I found out that 7 years after arresting my dad, taking him through a Kangaroo court and accusing him of being a criminal just because he is my dad. MY DAD HAS BEEN RELEASED! This is due to the pressure we have put on the Turkish regime.”

Speaking out against the NBA and China

Freedom has also played a big role in speaking about issues in China and the United States. In an interview with Fox News, Freedom stated, “I remember doing a basketball camp with Hakeem Jeffries, the congressman. And after that, I was taking pictures with the kids. This parent pretty much called me out in front of everybody. He’s like, ‘how can you call yourself a human rights activist when your Muslim brothers and sisters are dying in concentration camps in China?’”

Freedom said this encounter made him feel ashamed of himself, having only focused on the events in Turkey and not in other parts of the world. Since then, Freedom started speaking about China’s treatment toward the Uyghurs, a small Muslim minority. Freedom called for athletes to boycott the 2022 Winter Olympics and also called on other celebrities to speak out. “There are so many, athletes, so many actors, so many celebrities out there who are scared because if they criticize China, obviously, they will be affected,” he said.

Hello Everyone!#DictatorErdogan @RTErdogan thugs attacked and threatened me today after Friday prayer in Boston at a mosque

Turkish Government don't even let me practice my religion freely in America let alone my freedom of speech is under attack@FBI@FBIBoston@bostonpolice pic.twitter.com/FH2Ixe6QcY

Though Freedom’s efforts did not result in athletes boycotting the games, it paralleled a diplomatic boycott in China. “I feel like it is definitely a good first step, but it is not enough,” Freedom said. “All the athletes, I believe, need to come out and say, ‘I’m not going to compete in a country where there is a genocide happening.’ That’s what I’m expecting from athletes.”

Freedom also spoke about his participation in the Black Lives Matter protests in 2020. “You know, when Black Lives Matter protests happened two years ago, right? I was a third one in the whole league, went out there and protested with my city in Boston,” Freedom told NPR. “Because I know even when we were kneeling, I was like, this is what I believe in, and I’m going to kneel with you guys.”

Leocciano Callao is a freelance journalist based in NYC. He has interned at Brooklyn Paper while studying in the NYC Semester in Journalism program at The King’s College in NYC. He studied Media, Culture and the Arts at Providence Christian College in Pasadena, California and played four years of college soccer. He is on Twitter @leocciano and hosts his own sports talk show/podcast on Instagram TV called “The Final Minute” (@thefinalminute_ on instagram) which he supports with a Patreon page.