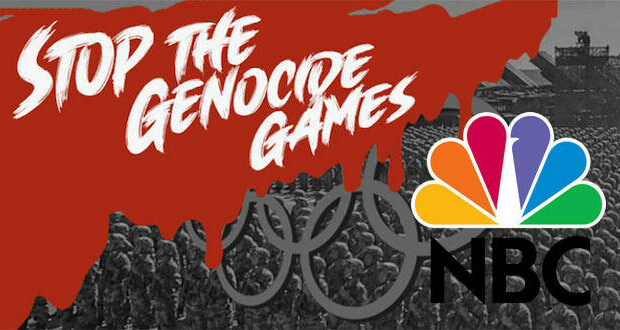 Pressure is growing for NBC to drop its broadcast of the Beijing Winter Olympics scheduled to be broadcast in February. The demand comes as protests continue against China’s genocide campaign against ethnic minorities in western provinces.

In June, a coalition of 200 human rights groups collectively appealed to NBCUniversal to take the step to avoid legitimizing abuses and “promoting the ‘Genocide Games.’” Internet memes have also spread calling it the “genocide Olympics.”

“The nearly one billion dollars that NBC Universal and its affiliates have invested in these Games means the organization bears the responsibility in addressing the impact of China’s human rights abuses,” Sen. Jeff Merkley (D-Ore.) and Rep. James McGovern (D-Mass.), chair and co-chair of the bipartisan Congressional-Executive Commission on China, wrote in a Dec. 16 letter to NBCUniversal’s CEO Jeff Shell.

The International Olympic Committee (IOC) derived 73 percent of its past four years’ revenue from selling broadcasting rights. About 40 percent of that income came from NBC alone.

That the Olympic sponsors have widely endorsed the United Nations Guiding Principles on Business and Human Rights, has created a responsibility for these companies to address the human rights impact of their products and services, the lawmakers said in the letter.

“Athletes, support staff, and members of the media will be present in a country where an active genocide is taking place, and in adhering with the charter of the Games to foster ‘respect for universal and fundamental ethical principles,’ NBCUniversal must think about what that means for those participating in Beijing and Chinese citizens alike,” the letter stated.

At a congressional hearing in July, top executives from Coca-Cola, Airbnb, Procter & Gamble, and Visa, all four American Olympics sponsors that have declared support for human rights globally, would not clarify whether they would back moving the Olympics to a different country or postponing the Games.

“As long as the governments are allowing the athletes to attend the games, we will be there to support and sponsor them,” one executive told officials.

In November, advocacy group Human Rights Watch said it has written to all but one of IOC’s top sponsors, as well as NBC, demanding to know why they had remained largely silent on the rights climate in China. The only reply came from IOC’s insurance partner Allianz, saying they “stand behind the Olympic Movement and our longstanding support for its ideals will not waver.”

The human rights watchdog Freedom House gave China a score of 9 out of 100 in its latest Freedom in the World report, labeling the regime “world’s most populous dictatorship.”

The United States, joined by allies such as Australia, Canada, Japan, and the U.K., have announced they would not send official delegations to the Beijing Olympics in protest against the regime’s atrocities in Xinjiang.

Pressure has been growing for NBC to drop the broadcast deal as the Games date draws near.

The Women’s Tennis Association has pulled out of China over Beijing’s handling of Peng, and NBC should follow suit, they said.

Previous: Microsoft Bing suspends auto-suggest in Communist China
Next: Facebook is ‘worst company of 2021’ according to survey