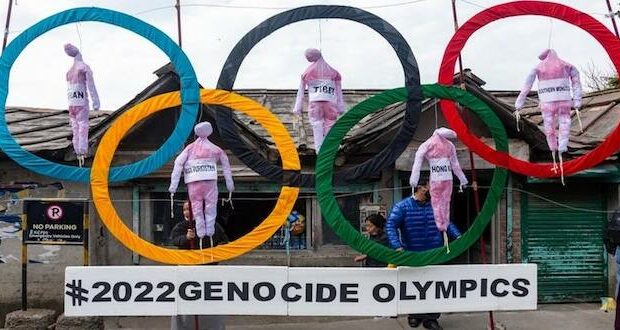 Ethnic Uyghurs protest the Olympics to be held in China.

It should be evident to all paying attention that the 2022 Beijing Winter Olympics will proceed as planned. Forget the meager protests against China’s cruel and immoral treatment of its own. The bad guys appear to be on the verge of another power-play victory.

Never mind the plight of China’s Uighur Muslims, underground Christian churches, Tibetan Buddhists and all the other groups the Beijing government labels a political threat. They’re of no lasting concern to the international elite, who are quick to issue public condemnations but oh so slow when it comes to follow-up.

China’s political power — a byproduct of its enormous economic strength — is just too much to counter. And Beijing’s despotic leaders darn well know it.

This recent Associated Press article — “Beijing Olympics open in 4 months; human rights talk absent” — underscores the point. These opening graphs summarize the story quite well. They’re also a reminder of the efficacy of traditional wire journalism’s inverted pyramid style. This piece of the story is long, but essential:

When the International Olympic Committee awarded Beijing the 2008 Summer Olympics, it promised the Games could improve human rights and civil liberties in China.

There is no such lofty talk this time with Beijing’s 2022 Winter Olympics — the first city to host both the Summer and Winter Games — opening in just four months on Feb. 4.

Instead, there are some calls for governments to boycott the Games with 3,000 athletes, sponsors and broadcasters being lobbied by rights groups representing minorities across China.

IOC President Thomas Bach has repeatedly dodged questions about the propriety of holding the Games in China despite evidence of alleged genocide, vast surveillance, and crimes against humanity involving at least 1 million Uyghurs and other largely Muslim minorities. Tibet, a flashpoint in the run up to 2008, remains one still.

“The big difference between the two Beijing Games is that in 2008 Beijing tried to please the world,” Xu Guoqi, a historian at the University of Hong Kong, said in an email to The Associated Press. “In 2022, it does not really care about what the rest of the world thinks about it.”

An expert on Chinese sports and the Olympics, Xu said Beijing in 2008 attempted to placate “world opinion.” “Now it tries its best to tell the world its intentions. If the world does not listen, so be it,” Xu wrote.

Xi Jinping is now the powerful general secretary of the Chinese Communist Party, but in 2008 he was in charge of running the Olympics.

The Beijing situation is loaded with news pegs.

For Olympic officials and aficionados, this includes the possibility that should the games be pulled from Beijing at this relatively late date, it could mean the collapse of the international Olympics movement.

That’s because as the games become ever more expensive to stage — and as citizen complaints in democratic nations about costs and inconvenience become louder — fewer cities are trying to land them. And that means that the Olympics are increasingly becoming the kind of circus that only authoritarian governments — answering only to themselves — are willing to stage. This is not a good look and will only increase the pressure on democratic nations and their athletes not to participate.

For others, Jews in particular, there is also this news peg: comparing Beijing 2022 to Berlin 1936.

I’ve noted the Berlin analogy previously in passing. The first time I did was in this 2019 post.

Moment, a monthly Jewish magazine based in Washington, though it updates online more frequently, takes on the Beijing-Berlin connection in its current edition. The piece, by former NPR religion reporter Tom Gjelten, is quite well done. It’s loaded with pertinent information.

Gjelten’s moral argument against Beijing 2022 relies mostly on China’s dreadful treatment of its Uighur minority. Gjelten wonders if China’s Uighurs are analogous to Nazi-era Jews — who, you should recall, were already highly persecuted as Adolf Hitler scaled up to his “final solution.” Gjelten wrote, in part:

Human rights advocates see a parallel between the muted response to China’s repression of the Uyghurs and America’s failure to challenge Nazi moves against the Jews in the 1930s, a time when the United States had deep political and economic interests in Germany. Senior American officials, including President Franklin D. Roosevelt, hoped a conciliatory approach to Hitler would encourage Germany to continue payments on its multibillion-dollar debt to U.S. creditors. Wall Street bankers were heavily invested in German industry and wanted to protect their stakes. Major Hollywood studios were omitting movie references to Jewish mistreatment in order to satisfy Nazi censors and maintain access to the important German film audience.

One lesson of those years was that it was a moral failure to let competing interests impede an effective response to the Nazi horror. The plight of the Uyghur people in China presents an opportunity to see whether that lesson was learned.

Humans, in my experience, come off poorly when it comes to learning historical lessons. They also tend to favor short-term economic benefits over long-term moral goods. For these reasons I have little faith in the global community doing what I think is the right move here, which would be to boycott these games.

Question for readers: How do religious leaders in your area, given the internet’s long reach — feel about this? Have they spoken out or just kept quiet? Are they even informed on this issue?

What does moral leadership even mean to them in today’s increasingly fractured, volatile, climate-challenged and pandemic-stymied world?

Ask. You may get an honest reply.

This article was originally published at Get Religion.

Ira Rifkin is an award-winning journalist and author specializing in the intersection of religion, culture, and politics, with special emphasis on globalization. He was formerly the news director of Belief Net, a Washington-based national correspondent for Religion News Service and has contributed to many publications, including the Los Angeles Times, The Washington Post, The Baltimore Sun. Metro Voice and others.

Previous: The real reason we have another (terrible) God’s Not Dead movie
Next: Research finds that daylight saving time is not worth the trouble