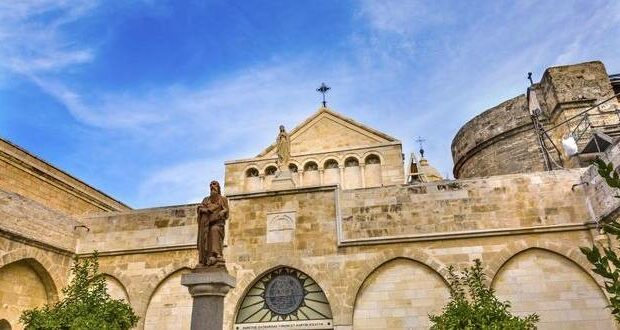 U.S. Christians play vital role in restoring Church of the Nativity in Bethlehem

Christians in the United States have pitched in to help restore the Church of the Nativity in Bethlehem, which is thought to be the birthplace of Jesus. The United Nations had considered it an endangered world heritage site all while the Palestinian Authority is undermining the Christian community.

The work comes as the Greek Orthodox Patriarch of Jerusalem, who oversees the church, says Palestinian militants are harming the Christian presence in Bethlehem, causing them to forfeit their rights, destroying church assets and violating their right to light Christmas trees on the plaza each year. Observers say it’s part of a concerted effort by militant Palestinians and the Palestinian Authority to “de-Christianize” the city.

But the remaining Christians aren’t willing to give up that easily, though it’s harder and harder to preserve their history there.

“The Church of the Nativity is a treasure of history and of faith,” Mazen Karam, managing director and CEO of the Bethlehem Development Foundation says.” “We’ve made great progress and look forward to completing the work to return this treasure back to the world.”

Completed around 565, the church has not been majorly renovated since 1480 and was in danger of collapsing. But in recent years, the church has undergone several restoration projects to its roof, facades, mosaics and doors, thanks to contributions from donors worldwide

The foundation launched a nonprofit, nongovernmental organization called the American Friends of the Bethlehem Foundation in 2018. Together, the groups have raised approximately $30 million in the past eight years to restore the church. Much of that funding has come from U.S. donors.

“Christians in the United States have an enthusiastic love for the holy city of Bethlehem,” said George Salem, president of the foundation. “We are thrilled by the outpouring of support from our American friends and their commitment to help revitalize the Church of the Nativity.”

The two organizations have helped fund restoration of the external facades, a wall mosaic, basilica doors, internal plaster, the last 11 columns of the central nave, the narthex, wooden architraves and installed lighting and smoke detection systems. They have other plans to further the project, which include consolidating the church walls against seismic activity, tiling the floor with stone and marble, restoring the stone tiles in the front yard and installing firefighting and microclimatic systems.

The ancient church was commissioned by Constantine the Great shortly after his mother Helena visited both Jerusalem and Bethlehem.

Over the last 30 years, the ancient city has seen its Christain population drop from over 88% to just 18%. Palestinian gangs, under the tacit approval of the Palestinian Authority (which is responsible for Bethlehem) have terrorized Christians into leaving the ancient city or to be silent. Today, the few tour groups that visit the church are met with Palestinian propaganda against Israelis and the West.

In 2019, the Greek-Orthodox Church signed a statement protesting the ongoing attempt by the Palestinian Authority (PA) to take control of the plaza in front of the Church of the Nativity.

One source close to the church stated “that Christmas ceremonies are gradually turning from a religious Christian event to a national event sponsored by the PA, even though in recent years it has acted to deprive Christians of their properties.”

Previous: Be part of a letter writing campaign for world’s persecuted Christians
Next: Christian starts bank to counter cancel culture threat to commerce