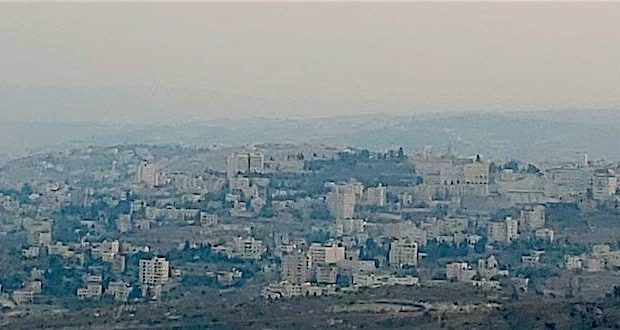 Although most children in Sunday school know that Bethlehem is in Israel, the location stirred up some controversy on a recent episode of “Jeopardy!”

Bethlehem is roughly six miles south of Jerusalem and is technically on the Palestinian-Arab side of the so-called 1967 “Green Line” — meaning it is located in Judea and Samaria and is still disputed by Israelis and Palestinians.

In a category called “Where’s the church?” the $200 answer was “Built in the 300s A.D., the Church of the Nativity.” Katie Needle, the first contestant to buzz in, responded, “What is Palestine?” Host Alex Trebek rejected her answer. Another contestant, Jack McGuire, asked, “What is Israel?” which Trebek ruled correct.

Needle, the contestant who first buzzed in incorrectly with “Palestine,” then smirked obliquely and poignantly as Trebek guided the program into a commercial break, according to The Daily Wire.

Reaction on Twitter was naturally mixed, with one’s view of the “Jeopardy!” judges presumably dictated by one’s overarching views of the Israeli-Palestinian conflict itself.

Omar Baddar, the deputy director of the anti-Israel group Arab American Institute, was clearly triggered. “Unacceptable!” he bemoaned. “Bethlehem is in the Palestinian territories which Israel illegally occupies (Katie Needle got the correct answer & was robbed).”

Palestine is not a country nor a people, say the majority of historians and Biblical scholars. The term Palestinian was given to ancient Israel after it’s conquest by the Romans. Anyone living in historic Israel and even before the creation of modern-day Israel in 1948, considered themselves a “Palestinian” – including Jews and Christians. When Israel became a nation, Arabs kept the nickname while those in the newly formed state began calling themselves Israeli’s. Historians say that the United Nations and Palestinians have continued the myth that they are a separate and distinct people’s group.

Secretary of State Mike Pompeo recently pronounced that Israeli “settlements” in Judea and Samaria are not, per se, illegal under international law.

“The Trump administration is reversing the Obama administration’s approach towards Israeli settlements,” Pompeo said on November 18. “U.S. public statements on settlement activities in the West Bank have been inconsistent over decades.”

“In 1978, the Carter administration categorically concluded that Israel’s establishment of civilian settlements was inconsistent with international law. However, in 1981, President Reagan disagreed with that conclusion and stated that he didn’t believe that the settlements were inherently illegal. After carefully studying all sides of the legal debate, this administration agrees with President Reagan. “The establishment of Israeli civilian settlements in the West Bank is not, per se, inconsistent with international law.”

Jeopardy has once again offered defenders of Bethlehem to speak out about the sad history of Palestinian control. The city previously was 85% Christian but over the years has dwindled to just 12% of its Christian residents remaining. Palestinian authorities and Arab gangs have been documented to be pushing the faithful out of the historic city. The problem exists for many Christian villages across the area controlled by the PA as Christians continue to flee the Palestinian Authority’s intimidation and threats.