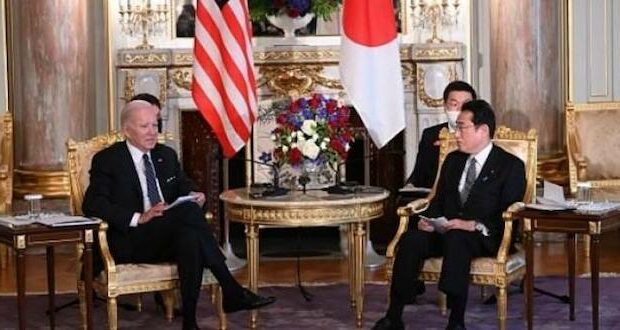 The Biden administration now says it will support Japan becoming a permanent member of the UN Security Council. The belated move comes almost five years after former President Donald Trump called for the addition of Japan as part of an overall reform effort.

Japanese Prime Minister Fumio Kishida said the nation is ready to join the other permanent members: China, France, Russia, the United Kingdom, and the United States.

“I expressed the necessity to reform and strengthen the United Nations including the Security Council, which bears an increasing importance for peace and security of the international community, and gained the [U.S.] president’s support,” said Kishida during a joint press conference with U.S. President Joe Biden on May 23.

“The president stated that the United States will support Japan becoming a permanent member of a reformed Security Council,” Kishida said.

Under the U.N. charter, it is the responsibility of the Security Council to maintain international peace and security. It determines deployment details of U.N. peace operations and decides how to respond to crises around the world. The council heard in testimony this week that the world has just a 10-week supply of wheat.

According to contributions received for 2022 for the United Nations Regular Budget, Japan had contributed the most of any nation, at over $230 million. Other high-contributing nations were Germany at $175 million and the UK at $125 million.

“As the world faces an unprecedented challenge caused by Russian aggression in Ukraine, and the heightened risk of the use of weapons of mass destruction, at next year’s G-7 summit, I hope we can demonstrate the will of the G-7 to resolutely reject aggression by force, threat of nuclear weapons, and attempts to overturn the international order with a strength that will make a mark in history,” Kishida said.

The prime minister talked about the strategic importance of the Indo–Pacific region and stressed upholding and developing a “free and open international order” together with the United States.

Biden launched the Indo–Pacific Economic Framework (IPEF) with 12 regional countries, along with the United States, during the Tokyo visit. The IPEF is touted as an economic partnership focusing on the Asia–Pacific region.

Biden talked about working together “to ensure a free and open Indo–Pacific that creates opportunity and prosperity for all people in the region.”

Biden supports Japan building up its defense capabilities, saying, “A strong Japan and a strong Japan–U.S. alliance is a force for good in the region.”

Japan is currently a non-permanent member of the United Nations Security Council that includes nine other countries: Angola, Egypt, Malaysia, New Zealand, Senegal, Spain, Ukraine, Uruguay, and Venezuela. They are elected on a regional basis for a term of two years.

Japan may renew its membership for 2023 for the 12th time, which would make the country the longest running non-permanent member.

There have long been calls for reform in the U.N. Security Council. During a 2017 summit between Trump and former Prime Minister Shinzo Abe, Trump said adding Japan was crucial to ensuring the effectiveness of the council.

Abe developed a close working relationship with the former president, saying Trump had done more for peace in Asia than anyone in 50 years.  Abe went on to nominate Trump for a Nobel Peace Prize in February 2019 for his efforts to forge a dialogue with North Korean leader Kim Jong Un.

Previous: How compromised pastors are contributing to our cultural rot
Next: Survey: Americans divided over role of faith in their lives