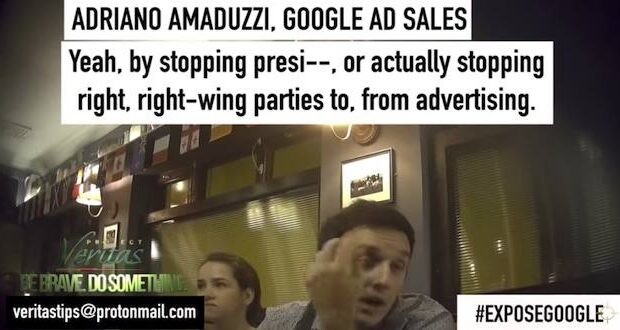 An undercover journalism nonprofit has released a video of a Google staffer speaking about the ability of the big tech giant to boost or censor political views.

Adriano Amaduzzi, a technical account manager at Google Marketing, was recorded by Veritas Media saying that Google can “offer free credits, free advertising credits to Democratic parties to advertise” and “can censor out news” from its search engine to suppress views it doesn’t want. “I don’t know how much you do that,” he added, presumably referring to Google.

Responding to a follow-up question, Amaduzzi acknowledged that Google’s Trust and Safety team can make decisions surrounding the matter.

He did not know that he was speaking to Project Veritas, which released hidden camera recordings of his comments late Tuesday.

In another segment, Amaduzzi can be heard saying that nearly “80 percent of videos uploaded have been blocked in total that contain hate speech.”

He later said that hate speech gets reviewed by people working in Google’s Trust and Safety team, and that it has the potential to get involved in the 2020 election by “stopping right-wing parties from advertising” and “reducing the exposure of their ads.” He did not dispute an off-camera comment that “the majority of Trust and Safety is extremely left.”

The founder and CEO of Project Veritas James O’Keefe said in a statement that Amaduzzi’s comments are consistent with other investigations by the organization into how social media giants manipulate speech and content.

“Recently we’ve seen censorship of free thought and stories from the big tech giants. Many believe this kind of editorial suppression will affect the upcoming election,” O’Keefe said. “But it seems the biggest tech giant of them all—Google—may have other ways to impact the election—this time coming from their ad sales division overseas.”

Project Veritas also recorded Amaduzzi saying that he had ignored a request by someone from the Conservative Party in the UK for advertising to promote Brexit.

“Funnily enough about Brexit, I had a guy LinkedIn me—I don’t know why—contacting me, saying, ‘Hi I’m the head of digital infrastructure of the Conservative Party of the United Kingdom. We would like to do advertising with Google. Could you help me with that?’” he said.

“I was like, I didn’t answer. You’re telling an Italian that lives in London that you want to advertise Brexit,” he added. “It’s like, seriously … promoting the blocking the free movement of European people. And you’re asking a European guy to help you do that … I didn’t help him.”

The latest report followed an earlier piece the investigative group released on Monday, in which Google Cloud Technical Program Manager Ritesh Lakhkar was recorded alleging that Google search is “skewed by the owners and the drivers of the algorithm,” and that the company is allegedly “playing selective God” over information Americans receive.

The news comes amid an antitrust lawsuit (pdf) filed on Tuesday by the U.S. Department of Justice and 11 states against Google. The suit accuses Google of anticompetitive and exclusionary practices that make it an unlawful monopoly in both search and advertising.

Google reacted to the suit, calling it “deeply flawed.”

“People use Google because they choose to, not because they’re forced to, or because they can’t find alternatives,” Kent Walker, senior vice president of global affairs for the company, said in a statement. “Our engineers work to offer the best search engine possible, constantly improving and fine-tuning it. We think that’s why a wide cross-section of Americans value and often love our free products.”

“This lawsuit would do nothing to help consumers. To the contrary, it would artificially prop up lower-quality search alternatives, raise phone prices, and make it harder for people to get the search services they want to use,” he added.

Sen. Josh Hawley (R-Mo.), a high-profile Silicon Valley critic, described the legal action as “the most important antitrust case in a generation.”

“Google and its fellow big tech monopolists exercise unprecedented power over the lives of ordinary Americans, controlling everything from the news we read to the security of our most personal information,” Hawley said in a statement.