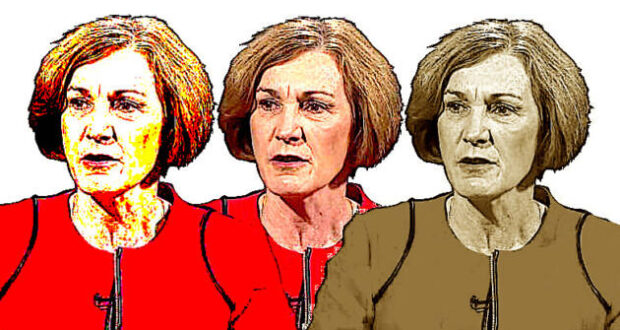 Perhaps the most interesting aspect of Democrat Barbara Bollier’s campaign is the way it, like a commercial for a defective appliance, misleads people with regard to her every flaw and failing. As part of Metro Voice’s voter guide coverage, we look at the Bollier that her commercials are promoting vs. the Bollier of reality.

Of course her greatest alleged claim to fame in the middle of a pandemic is her status as a physician. This is important, because Congressman Dr. Roger Marshall is a practicing physician who has been in the trenches fighting the pandemic during recesses from Congress. And so, Bollier uses her status as a “doctor” to claim expertise on the healthcare system, how the government can provide better medical care and, of course, her radical position on abortion.

The reality however, is somewhat different. Dr. Bollier was an anesthesiologist when she “retired” over 20 years ago. Since then, there is no evidence that she has kept up on advances in her former career nor has there been any explanation of why a woman who pursued such a career would suddenly leave it when she had barely arrived.

Also puzzling is the fact that Bollier claims to have recertification to practice medicine around the time of the primary a few months ago. Again, we are left to wonder what demands the Kelly administration placed on her to make up for all of the continuing education demanded of practicing physicians. Again, no answers are forthcoming from either Democrat Gov. Kelly or Bollier. Needless to say, the establishment media in Kansas has shown no curiosity in finding an answer to either question.

A “moderate” supported by “Republicans”

As sure as the sun rises in the east and sets in the west, every election cycle a group of political has-beens come out of the woodwork to once again sign a document proclaiming that they are “Republicans For (insert name of Democrat here)”. This time the list of sour grapes “Republicans” was supplemented by recent losers of Republican primaries like John Skubal and Jan Kessinger, both from Leawood and Diana Dierks from Salina, among others. There is nothing new about it or even newsworthy. Any Kansas voter old who has paid attention has seen this each and every cycle. This time, however, Democrats on the east and west coast are spending millions on TV and radio ads promoting it to the uninformed.

But is Bollier a moderate? Wasn’t she a Republican? No and yes. Even when she was a Republican, Bollier’s voting record was to the left of most Kansas Democrats and she even caucused with the Democrats on occasion. Her decision to switch parties came about only after she was admonished on the floor of the Senate for her hateful remarks against people of faith (discussed below) and then had her committee assignments yanked when she supported liberal Democrat Laura Kelly. Since switching she has maintained positions that are to the left of even many of the Democrat Party’s most liberal members. That’s quite a feat.

For example, she sponsored a bill that involved confiscating firearms and recently praised gun confiscation implemented in Australia. She supports fetal cell research, is on the far extremes of the abortion issue and was the only Kansas legislator to vote AGAINST stiffer penalties for failing to report child abuse. She was one of two senators, Diana Sykes being the other, who voted to allow physicians to issue Do Not Resuscitate orders on children without the parents’ permission. Neither as a Republican or Democrat has she ever sponsored a bill that became law. To say that Bollier is extreme is an understatement.

While not a pillar of her campaign, I was appalled at a mailer we received in which Jan Kessinger, another candidate rejected by Republicans in the primary, touted Bollier’s “Christian faith”. Normally, I would not question the sincerity of anyone’s Christian walk, my own having been advanced by pastors who could easily be described as liberal, but when Bollier stood on the floor of the Kansas Senate and denounced Catholics (and by implication virtually every Christian of any denomination) for their belief in sin, that claim is disingenuous at best and an outright lie at worst. The very essence of Christianity is that Christ died on the cross as payment for our sins. Without sin, his death on the cross is as meaningless as Bollier’s claims of faith.

The postcard I received also mentions that Bollier was an elder in a congregation, but doesn’t mention the church. That is true, but you should also know that the same church was criticized a few years back in the pages of the Jewish Chronicle for allowing anti-Semitic groups to meet there. Prior to that former minister Robert Meneilly, following the lead of national Democrats, created a local version of the Mainstream Coalition, an organization that attempted to thwart religious conservatives attempts to reform the sleazier elements of the Johnson County and state Republican party.

Local columnist and Mission Hills attorney Dwight Sutherland, an expert on the group’s history, refers to Meneilly as a “blow dried Elmer gantry” the Mainstream as an “anti-evangelical hate group” and stated that “Meneilly and his minions have deliberately tried to play off protestants versus Catholics, Christians versus Jews, and black versus whites.” Clearly, Bollier fits right in with such a hateful agenda.

Essentially, Bollier and her supporters in the media know that if voters knew her actual positions, even with her millions from Hollywood and eastern elites, she would never be elected. And so, like a cheap commercial peddling a defective appliance, they create myths that obfuscate the real Barbara Bollier behind a barrage of fake talking points and disinformation they hope will last until election day.

Kansans know better, or at least we hope they do.