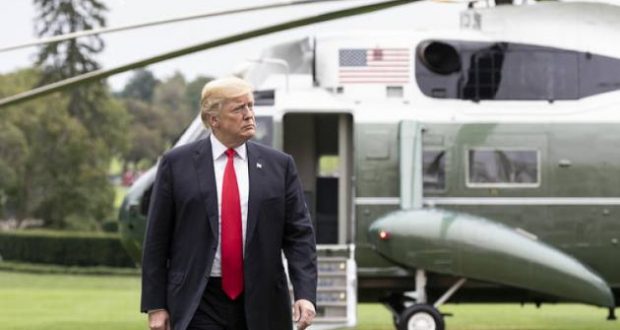 President Trump has stood firm on comments in which he suggested some liberal legislators in the Democrat Party should go back to their “broken and crime infested” home countries, saying that their bad-mouthing of America could not go unchallenged.

One of those assumed to have been targeted for the comments is Congresswoman Ilhan Omar (D-Minn.) who immigrated from Somalia and became a citizen after marrying her brother. Omar is known for her anti-Semitic and anti-American comments on Twitter and little covered gatherings of radical leftists.

Last week Omar asserted at a gathering of liberal tech companies that she was “more patriotic” than native-born Americans. This comes after a string of comments where she has defamed American democracy, culture, the middle class and whites Americans for their “privilege.”

Omar has repeatedly said that all Trump voters are racists.

Apparently, for the leader of the free world, it was just too much for Donald Trump, who of course, picked up his phone to tweet.

Writing on Twitter late on July 14, Trump criticized Democrats for “sticking up for people who speak so badly of our country,” before later saying that the “radical left congresswomen” should apologize for their “foul language.”

His initial posts on Twitter had unleashed a torrent of criticism from across the Democrat Party with many accusing him of being racist.

Trump responded with two more posts late into the evening on July 14.

“So sad to see the Democrats sticking up for people who speak so badly of our country and who, in addition, hate Israel with a true and unbridled passion,” he wrote.

“Whenever confronted, they call their adversaries, including Nancy Pelosi, ‘RACIST’.”

“Their disgusting language and the many terrible things they say about the United States must not be allowed to go unchallenged.

“If the Democrat Party wants to continue to condone such disgraceful behavior, then we look even more forward to seeing you at the ballot box in 2020!”

Adding to the theme, the next morning he wrote on July 15: “When will the Radical Left Congresswomen apologize to our Country, the people of Israel and even to the Office of the President, for the foul language they have used, and the terrible things they have said.”

Last week Trump had defended Pelosi against what he said were accusations of racism made by progressive congresswoman Alexandria Ocasio-Cortez, as the Democrats appeared to struggle with a rift between the moderate and progressive wings of the party.

In his first series of Twitter posts on July 14, Trump called out several liberal Democrat congresswomen.

“So interesting to see ‘Progressive’ Democrat Congresswomen, who originally came from countries whose governments are a complete and total catastrophe, the worst, most corrupt and inept anywhere in the world (if they even have a functioning government at all), now loudly and viciously telling the people of the United States, the greatest and most powerful Nation on earth, how our government is to be run,” he wrote.

He suggested that the congresswomen should “go back and help fix the totally broken and crime infested places from which they came. Then come back and show us how it’s done.”

Such countries, he added, “need your help badly, you can’t leave fast enough. I’m sure that Nancy Pelosi would be very happy to quickly work out free travel arrangements!”

Trump’s remarks appear to have either rallied the party together at a time of in-fighting and division in the Democrat Party, or to have forced the more moderates to side with the progressive elements of their party.

His comments came after a week of tension between the house speaker and four freshmen progressives in the party: Ilhan Omar (D-Minn.), Rashida Tlaib (D-Mich.), Alexandria Ocasio-Cortez (D-N.Y.), and Ayanna Pressley (D-Mass.).

Democrats claimed that Trump was referring only to these Congresswomen, noting that of the group only Omar was not born in America. Trump did not name names in his posts.

Omar was born in Somalia, a country that has lacked a functioning government since the late 1980s and has been mired in instability, terrorist attacks, and civil war.

Ocasio-Cortez, who is of Puerto Rican descent, fired back at Trump’s initial Twitter posts. “You are angry because you can’t conceive of an America that includes us. You rely on a frightened America for your plunder,” she wrote on Twitter.

She later added: “But you know what’s the rub of it all, Mr. President? On top of not accepting an America that elected us, you cannot accept that we don’t fear you, either. You can’t accept that we will call your bluff & offer a positive vision for this country. And that’s what makes you seethe.”

Responding to Trump’s initial remarks, Pelosi wrote on Twitter: “When @realDonaldTrump tells four American Congresswomen to go back to their countries, he reaffirms his plan to ‘Make America Great Again’ has always been about making America white again. Our diversity is our strength and our unity is our power.”

However, just days before, she questioned the influence of these progressives in a New York Times interview.

“All these people have their public whatever and their Twitter world,” she told The Times. “But they didn’t have any following. They’re four people and that’s how many votes they got.”

Ocasio-Cortez responded, suggesting that Pelosi is racist because she attacks “elected women of color.”

“When these comments first started, I kind of thought that she was keeping the progressive flank at more of an arm’s distance in order to protect more moderate members, which I understood,” she told The Washington Post.

“But the persistent singling-out … it got to a point where it was just outright disrespectful … the explicit singling-out of newly elected women of color,” she added.