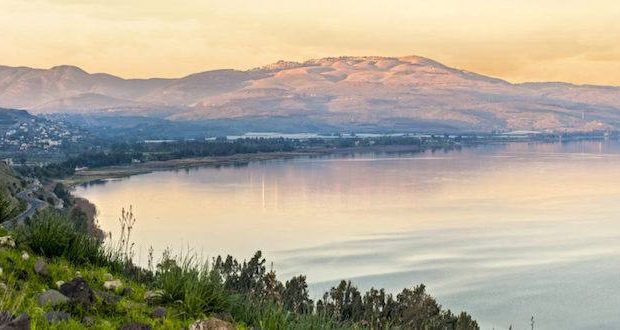 This week, as I was reading Israeli news headlines, an article grabbed my attention: “Galilee just six feet away from maximum capacity!”

I was ecstatic. For many in Israel, the Galilee level is seen as a gauge for average rainfall, an indicator of where they are in the need for rain each season. For years now, Israel has been under near-drought conditions, and the Galilee has sunk to a record low level. But now, with abundant rains pouring down on the land of Israel over the last few months, the current Galilee level has risen to an almost normal state. 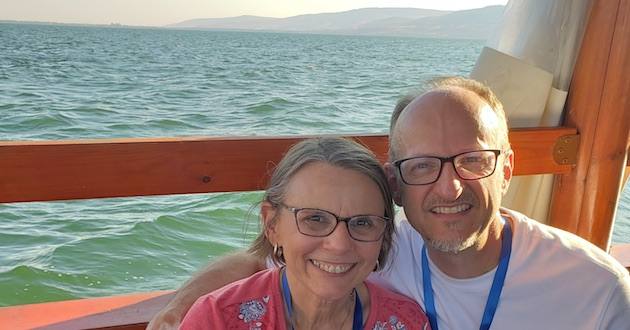 Anita and Dwight Widaman on the Sea of Galilee in September, 2019.

This is something described by some in Israel as a miracle.

But why is rain so crucial to Israel as a country? After all, they do have other sources for water.

To answer this, we should look back to the covenant God made with Israel in chapter eleven of Deuteronomy. Here, God lays some basic premises or conditions. If Israel is faithful to follow after Him and walk in righteousness, He will, in return, provide material blessings. One of these blessings is that of rain.

“And it shall be that if you earnestly obey My commandments which I command you today, to love the Lord your God and serve Him with all your heart and with all your soul, then I will give you the rain for your land in its season, the early rain and the latter rain.” Deuteronomy 11:13-14

Here God is telling His people that rain is a condition – a gauge – so to speak, of their relationship with Him. When Israel walks righteously, the rain will come; if they walk in sin, the rain will stop.

JOIN US: Metro Voice wants you to travel to Israel with us this June!

This brings up an interesting question. Why does God choose rain as a sign of when His people are walking righteously?

Water is the lifeblood of life as we know it. If we were to go without water for even a short amount of time, our bodies would quickly begin to dry up. If we continue without water for several days, we die. If this is true about water, how much more about God? He is our lifeblood, physically, and spiritually. Without Him, we quickly begin to dry up, resulting in spiritual death.

God is telling Israel that as essential as water is to their day to day lives, He will always be more essential. Meaning if they ever should forget Him, He will take away the water supply resulting in a quick and sure reminder to turn back to Him. Have you ever gone an entire day without water, or maybe two? It’s not something you will easily forget.

Is this covenant sign of rain between Israel and God still in effect today?

VIDEO: The Galilee was flooding in June and with 2020 rains, its getting higher still.

Psalm 105:10 says, “He remembers His covenant forever, the word which He commanded, for a thousand generations.”

God is faithful, remembering His promises and covenants forever. Not only did He bring His people back to their land after two thousand years of exile, but He restored their language and brought the land back to beauty again. While this was happening, Israel’s average rainfall began to increase. Evidence even goes so far as to show that throughout the last 70 years, some of Israel’s most dramatic surges in aliyah (Jews returning to Israel) have paralleled a dramatic increase in average rainfall!

I believe this could be God blessing His people like He promised in Deuteronomy.

Despite all of this, Israel as a whole has struggled with secularism since its founding. But could this also be a fulfillment of prophecy?

Ezekiel 36:24 says, “For I will take you from among the nations, gather you out of all countries, and bring you into your own land. Then I will sprinkle clean water on you, and you shall be clean; I will cleanse you from all your filthiness and from all your idols. I will give you a new heart and put a new spirit within you.”

It would seem that God is indicating here that Israel’s return to the land would be mostly secular. But after their return, when they are established as a nation, God will sprinkle clean water over them, cleansing them from all unrighteousness. And this seems to be what is happening.

Israel, as a nation, has been on a dramatic climb in spirituality, leaning more and more toward conservative ideas each year. In fact, Israel may be one of the few countries in the world right now where the culture is becoming primarily more conservative with time!

With this conservative trend in Israel and the knowledge of the unique covenant between God and Israel concerning rain, you see why I was excited reading the article about the Galilee level. God is on the move in Israel, restoring the land and people one step at a time, and I believe the rising rains are a reflection of this.

Previous: 1917 takes you on a journey through the ‘war to end all wars’
Next: Multiracial churches present challenges for pastors of color