Home / News / Columns / America began in a covenant with God 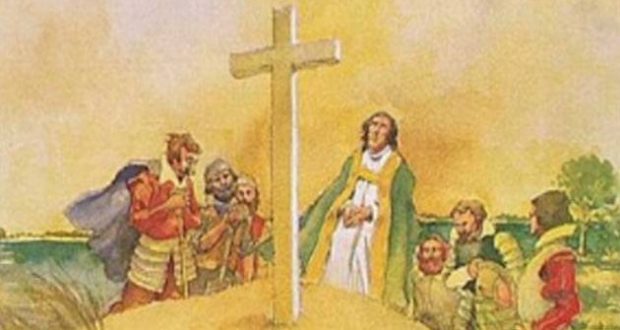 The Reverend Robert Hunt gives thanks with other English settlers at Cape Henry, Virginia.

America began in a covenant with God

Covenants are viewed as the most sacred and binding of deals – an oath that’s never to be broken. America’s earliest settlers made a covenant with God to serve and proclaim Him throughout the earth.  These days, however, Americans appear to have forgotten this covenant and that can have dire consequences.

In an appearance on the Christian Broadcasting Network Christian leader Dutch Sheets explained how God’s relationship with us is set by sacred covenant.

The author of Giants Will Fall said, “It’s even what He based our salvation on: ‘I’m coming to bring a new covenant through Jesus. The shedding of His blood ratifies this covenant.’ It is a binding together that in Him is unbreakable.”

Early English settlers also wanted their new land to share such a binding covenant with God. Christian historian Eddie Hyatt, author of The Great Prayer Awakening of 1857-58, said those who came to Jamestown starting in 1607 put it in their Virginia Compact.

“To propagate, to expand the gospel, the kingdom of the Lord Jesus Christ and to take the gospel to people who were ‘lying in darkness and had no knowledge of the one true God.’ They said that was the reason they had come,” Hyatt stated.

The Pilgrims arriving in Massachusetts stated the same in 1620. Jerry Newcombe, author of The Book That Made America, paraphrased what they wrote down: “‘Having undertaken a voyage for the glory of God and the advancement of the Christian faith.'”

Newcombe explained of the Pilgrims and Puritans who followed, “They came for God as opposed to coming for gold.”

Hyatt says John Winthrop, leading 700 Puritans to Massachusetts in 1631, said it like this: “‘Others may come to the New World for wealth and furs.’ He said, ‘We have another goal, another end. We have entered into an explicit covenant with God to be His people in this New World.’  And they wanted to be that city on a hill. They wanted to be a model of Christianity for the rest of the world to see.”

David Barton of Wallbuilders said as these early settlers wrote out their covenants, “They were very cognizant of the fact that we answer to God. We need to get God at the center of what we do. If we do, He’ll bless us.  If we don’t, we’re in trouble.”

These Covenants Became Models for the US Constitution

These early covenants pledged the signers to each other and to obeying the laws they’d form with God’s guidance.

As Newcombe put it, “This was something that would bind each man and each person to the whole community as an agreement under God.”

According to historian William Federer, such compacts became the model for the US Constitution, whose authors were also very much guided by their Christian faith.

The writer of the online AmericanMinute.com stated, “George Washington at the beginning of the Constitutional Convention, he said ‘the event is in the hand of God.'”

How Has America’s Constitution Lasted So Long?

He went on, “The average length of a constitution in the history of the world was 17 years. So how have we gone 230 when everybody else was going 17?   And so political science professors looked to see where the Founders got their ideas.”

Barton pointed out they studied 3,154 direct quotes from these Founders’ political writings and discovered how much God’s Word figured in them.

He summed up, “The number one source was the Bible: 34 percent of all those quotes in those political documents, etc., came out of the Bible.”

Sheets explains in his book Giants Will Fall  that the makeup of the government was shaped by biblical passages like Isaiah 33:22, writing, “Our nation’s form of government was actually taken from scripture.  ‘The Lord is our Judge {Judicial Branch}…Lawgiver {Legislative Branch}…and King {Executive Branch}.'”

The Founders put God first and foremost in the Declaration of Independence.

Federer stated, “It says right in there ‘appealing to the Supreme Judge of the world.’ In this founding document, we appealed to God. We invited Him to be a part of this American experiment.”

The Founders put Scripture on the Liberty Bell, Leviticus 25:10: “Proclaim liberty throughout the land to all the inhabitants thereof…”

The concept of this being one nation UNDER God harkens back to Jesus telling Jerusalem in Luke 13:34 that He wanted to “…hide you UNDER my wings, covering and protecting you.”

What happens though, as parts of the nation don’t want to be under God, disregard parts of the Constitution, and no longer honor sacred oaths?

Sheets warned, “We have walked away from covenant with Him.”

And even from the marriage covenant, with the divorce rate soaring 302 percent in the 20th century.

Newcombe argued, “A lot of the things that we’re experiencing in America today are because we’ve disregarded God’s covenant.”

Newcombe explained God warned about this, saying, “‘Obey me then I will bless you. But if you disobey me, I will remove my blessing.'”

So Much Is on the Line

If America really is to be the place from which the Gospel is spread to the whole world, then the salvation of billions hangs in the balance.

Sheets believes there’s hope, but only if Americans return to honoring their covenant with God, because that makes us His family.

Sheets gave an example, saying, “If the kids across the street I don’t know, if they do something evil or wrong, I feel no responsibility to try to bring them back into the fold, because I’m not in covenant with them. I’m not in that relationship. God is the same way.”

Barton pointed out the long-suffering faithfulness of the Lord, saying, “We’re told in Psalm 105 He keeps His covenant for a thousand generations.”

Sheets added, “I don’t think there’s a stronger force in the world.”

So there’s a chance the nation can still someday completely fulfill the prophecy of destiny Jamestown chaplain Robert Hunt said in 1607 as he came ashore in Virginia, just a few miles from where the Christian Broadcasting Network’s headquarters are located.

Hyatt explained, “He made this declaration which I believe was prophetic. He said ‘from these very shores the Gospel shall go forth, not only to this New World, but to all the world.'”

It just takes getting back to covenant. As Joel 2:13 says, “Now return to the Lord your God, for He is gracious and compassionate, slow to anger, abounding in loving-kindness.”

Previous: C5Alive luncheons to feature Barry Feaker, Max Manning
Next: Who were the first settlers of Jamestown?