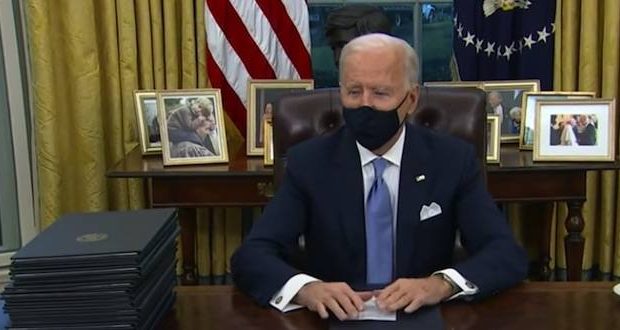 Biden wore a mask while seated behind the desk President Donald Trump had used just hours before. In front of Biden was a stack of orders he continued to sign into early Wednesday evening. He said there was “no time to start like today.”

The first order Biden signed was related to the coronavirus pandemic. He also signed an order reentering the U.S. into the Paris Climate Accord and allowing immigration from Syria, Iran and North Korea.

Surprising many, Biden’s orders did not include a reversal of the well as the so-called Mexico City policy, which bans U.S. funding for international organizations that perform abortions.

READ: How the Climate Accord hurts the world’s poor

Contrary to media speculation, President Donald Trump had left the incoming president a personal note on the Resolute Desk. The new president said Trump “wrote a very generous letter.” But Biden said he wouldn’t reveal its contents until he had a chance to speak with Trump by phone.

Biden, who was inaugurated by giving one of the shortest speeches in modern history, did not take questions from the press.

The executive orders and other planned policy changes will come in a flurry of activity in the next 10 days according to the new administration. Aides say Biden will look to refashion the country without having to go through an evenly split Senate in which Democrats will need the vote of Vice President Kamala Harris to break ties.

Republicans on Wednesday, even in a spirit of the successful transfer of power, signaled that Biden will face fierce opposition on some parts of his agenda and executive orders.

One of his orders seeks to institutionalize the Deferred Action for Childhood Arrivals, known as DACA, the Obama administration’s policy that kept “dreamers” in limbo. President Trump had asked Congress to take up the issue and provide legislation that he could sign but the Congress, whether controlled by Republicans or Democrats, could not move on legislation. Biden’s new plan would include providing an eight-year path to citizenship for an estimated 11 million people living in the U.S. illegally.

Republicans say it only makes the matter worse.

The Biden policy would lead to “a permanent cycle of illegal immigration and amnesty that would hurt hard-working Americans and the millions of legal immigrants working their way through the legal immigration process,” said Chris Hartline, a spokesman for the National Republican Senatorial Committee.

Metro Voice is a locally-owned national news outlet. We are advertiser and donor supported. Please consider advertising your business or donating HERE.