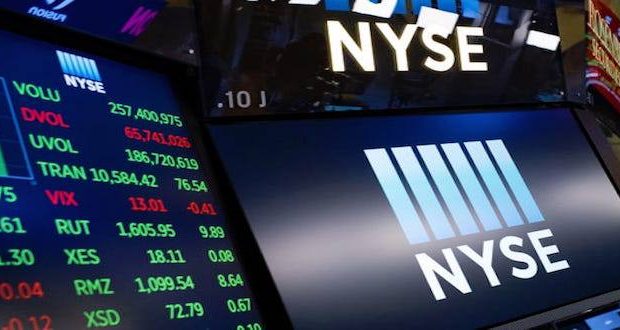 WASHINGTON—U.S. stocks dropped sharply on Aug. 14, as the bond markets signaled concerns about a possible recession with the yield curve inverting for the first time in 12 years. The inverted yield curve, however, isn’t an indicator of recession in the current market environment, according to experts.

Investors pushed the panic button after the main yield curve briefly inverted, meaning the yield on the closely watched 10-year U.S. Treasury bond fell below the yield on the 2-year note for the first time since 2007.

Investors consider yield inversions a reliable recession indicator, as such an inversion has always preceded each recession during the past 50 years.

In a healthy bond-market environment, the yield curve generally slopes upward, meaning the financial markets expect higher interest rates in the future. But when investors begin to worry about a market slowdown, the yield curve slopes downward, causing the curve to flatten or invert.

Yield curve flattening and inversion typically happens when investors are less confident in the future. With the perceived risk rising in the markets, people jump from risky investments such as stocks to safe assets like Treasury bonds, gold, and cash. The higher demand for long-term bonds pushes up bond prices and suppresses the bond yields.

The recent curve behavior isn’t the start of a trend, according to Goldman Sachs. It’s more likely driven by the questions about the Federal Reserve’s next move.

“Recent flattening of the U.S. yield curve has likely been driven by perceptions that the Fed may ease more gradually than currently priced by markets,” a Goldman Sachs report stated.

“We expect U.S. yield curves beyond 2-year maturities to re-steepen,” the report stated. “We expect continued flattening only in the scenario where U.S. [economic] data improve while data in other large economies deteriorate further.”

“I think the U.S. economy has enough strength to avoid that,” Yellen told Fox Business on Aug. 14. “But the odds have clearly risen and they are higher than I’m frankly comfortable with.”

She also thinks the yield curve isn’t as good of a signal of recession as it used to be.

“So historically, it’s been a pretty good signal of recession, and I think that’s why the markets pay attention to it, but I would really urge on this occasion, it may be a less good signal,” Yellen said, adding that factors other than market’s expectations about future interest rates are pushing down long-term yields.

Fears of recession slammed the stock market on Aug. 14, with the Dow Jones Industrial Average losing 800 points, or 3 percent, suffering its worst day of the year.

An inversion in the yield curve is “a sign of a very significant fear of deflation,” according to Stephen Moore, chief economist of the Heritage Foundation.

To combat deflation, the Fed needs to cut rates “immediately” and inject more dollar liquidity into the global economy, Moore said in an interview with NTD.

According to Moore, the sharp fall in commodity prices in recent weeks signal that there is a worsening global dollar shortage.

“The whole world is jittery right now,” he said, noting that the escalation of U.S.–China trade war is disrupting the markets.

And with this nervousness in financial markets, “everybody rushes to buy American dollars because it’s a flight to safety. And therefore you’re seeing interest rates fall, you’re seeing the inversion of our yield curve. It’s not a healthy situation,” he explained.

In the UK, the yield curve also inverted for the first time since 2008, another worrying sign for central banks and investors around the world.

Global economic slowdown and trade concerns will continue to weigh on global markets, according to analysts.

“The broader macro narrative gives little reason to call the bottom in yields,” wrote Citigroup in a note to institutional clients. “Markets speculate about a worsening global macro backdrop and in turn a more aggressive move by the Fed,” the note added.

The U.S.–China trade dispute, the risk of a currency war, and a no-deal Brexit put pressure on German manufacturers, according to analysts. The new reports raised fears that Europe’s largest economy is nearing a recession.

Meanwhile, China’s economy worsened under the weight of the trade war and the country’s mounting debt problem. The economic growth in the second quarter slumped to its lowest level in nearly three decades. And the jobless rate in July hit a record high.

China’s official gross domestic product growth slowed to 6.6 percent in 2018 and is projected to drop to 6.2 percent this year, according to the International Monetary Fund.

Investors expect the Fed to be more aggressive on rates cuts if global economic weakness persists. Despite robust consumer confidence and reasonable economic growth in the United States, more investors now bet the Fed will cut rates by 50 basis points at its September meeting.

Trump has long been critical of the Fed, openly criticizing the central bank and its chief for increasing interest rates “too much” and “too fast” and hence slowing the U.S. economy.

In a pair of tweets, Trump said, “China is not our problem. … Our problem is with the Fed.”

He said the central bank is “now too slow to cut” rates.

“Spread is way too much as other countries say THANK YOU to clueless Jay Powell and the Federal Reserve. Germany and many others are playing the game!” he continued, suggesting that central banks around the world set easy policies to revive their economies.

“CRAZY INVERTED YIELD CURVE!,” Trump wrote. “We should easily be reaping big Rewards & Gains, but the Fed is holding us back. We will Win!”