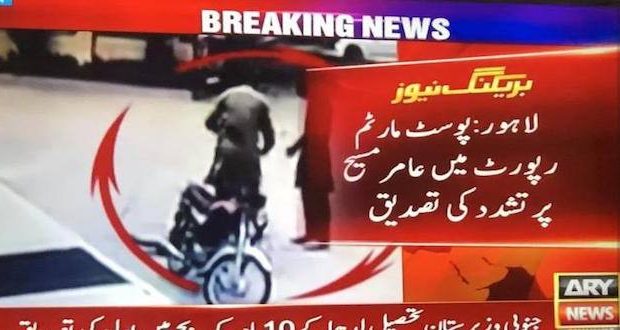 Amir Masih being put in a wheel chair after police tortured him.

A Christian man has been tortured to death, not by terrorists, but by Pakistani police while in their custody.

The shocking incident came to light this week after news emerged from the city of Lahore, Pakistan.

A Pakistan news channel reported on Aug. 28 that officers detained 28-year-old Amir Masih on a bogus charge of theft, after which he was brutally beaten and tortured while in custody. The incident is being widely reported in Pakistani press which is unusual.

Channel Geo TV reported that a post-mortem examination carried out on Masih’s body “revealed he was tortured to death by Lahore police.” The report indicated that many of Masih’s ribs were broken and that he had torture marks on his hands, feet and back. 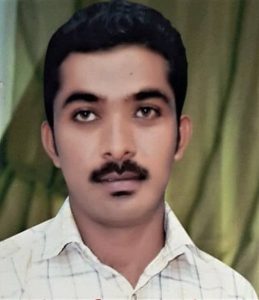 Amir Masih, 28, was tortured to death by Pakistani police while in custody.

Surveillance footage backs up this narrative: two police officers are seen dragging Masih into a hospital on a motorcycle. Then, sometime later, the police can be seen ushering Masih out of the hospital in a wheelchair and bundling him into a cab.

Masih’s brother, Sunny, told Morning Star News that officers had “urinated on Amir’s face and body and mocked his Christian faith,” as they tried to force a false confession.

Sunny added that his brother’s whereabouts were not known for three whole days after he was effectively abducted by the police with no explanation. When the family was finally able to see him on September 2, Amir was barely alive and had been beaten mercilessly.

“We rushed to the police station, where we were handed a semi-conscious Amir,” Sunny recalled. “He was beaten up mercilessly, and his body was full of bruises. While we were taking him to the hospital, Amir told us that Inspector Nasir Baig, Sub-Inspector Zeeshan and four unidentified constables had tortured him continuously for four days.”

Another of Amir’s brothers, Zahid Masih, told UCA News that Amir “was brutally beaten and electrocuted.”

Five officers have been arrested over his murder. Masih leaves behind a wife and two sons, aged two-weeks and 7-years-old.

Police brutality and torture are “common practice” in Pakistan

In response to the shocking death, one Christian persecution expert warned that this sort of brutality is becoming increasingly normalized in the South Asian nation.

“Amir Masih’s death is an absolute tragedy. However, the circumstances leading up to his murder are not uncommon,” William Stark, International Christian Concern’s Regional Manager for South Asia, told Faithwire.

“To start, police brutality and torture are a common practice in Pakistan. In addition, Pakistani Christians experience widespread discrimination and ever-escalating levels of religious intolerance on a near-daily basis. This discrimination and intolerance permeates much of Pakistan’s society and means Christians are often mistreated by authorities, beyond the police.”

Stark added that it was “very likely” that Amir “was singled out by police and tortured” in a “failed attempt to secure a false confession, because of his religious identity.”

Another Christian dead in police custody, in the same province

Videos of police torturing other Christians have emerged this year.

In response to the cases and the video footage taken of the torture incidents, police across Punjab province have been ordered not to use their mobile phones while on duty.

“In future, no officer below the rank of SHO (Station House Officer) or in-charge of a deployed duty will use a cellphone while on duty,” read a letter to officers obtained by Pakistan’s leading English-language newspaper, Dawn.

The memo added that it was “strictly forbidden” for officers to take videos of their colleagues while on duty. Any officer who violates the order was threatened with “severe departmental action.”

Saiful Malook, the lawyer who represented Asia Bibi, told MorningStar that Amir Masih’s murder in police custody “is not only a serious crime but also a severe violation of the constitution.”

“Therefore, it should be taken up very seriously,” he added, “and the police alone should not be trusted in this regard.”

Previous: News Briefs: Study finds prejudice down under Trump; No Taliban talks; China and 5G; Police union backs Trump
Next: Getting the taxman out of your retirement — Part 2