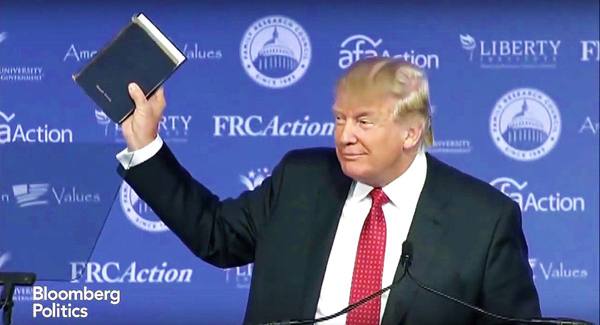 Christian revival: This season, Donald Trump brings faith in God back to the Presidency

I don’t expect Donald Trump to announce a transition into the ministry any time soon. But the man has really turned things around in the aftermath of Obama, with regard to invoking God and his blessings.

Barack wasn’t much for it.

Watching the President’s Thanksgiving message, it was impossible to ignore his recognition of a higher power.

Such a thing was — not very long ago — normal. We all know the founders recognized a deity, but that national faith goes all the way through American leadership. On October 4, 1982, in fact, Congress passed Senate Joint Resolution 165, allowing President Ronald Reagan to declare 1983 the Year of the Bible.

Can you imagine Obama doing that?

The resolution even called the Bible “the Word of God,” for Pete’s sake:

Whereas the Bible, the Word of God, has made a unique contribution in shaping the United States as a distinctive and blessed nation and people;

Whereas deeply held religious convictions springing from the Holy Scriptures led to the early settlement of our Nation;

Whereas Biblical teachings inspired concepts of civil government that are contained in our Declaration of Independence and the constitution of the United States;

Whereas many of our great national leaders–among them Presidents Washington, Jackson, Lincoln, and Wilson–paid tribute to the surpassing influence of the Bible in our country’s development, as the words of President Jackson that the Bible is “the rock on which our Republic rests”;

Whereas the history of our Nation clearly illustrates the value of voluntarily applying the teachings of the Scriptures in the lives of individuals, families, and societies;

Whereas this Nation now faces great challenges that will test this Nation as it has never been tested before; and

Whereas that renewing our knowledge of and faith in God through Holy Scripture can strengthen us as a nation and a people: Now, therefore, be it

Resolved by the Senate and House of Representatives of the United States of America in Congress assembled, That the President is authorized and requested to designate 1983 as a national “Year of the Bible” in recognition of both the formative influence the Bible has been for our Nation, and our national need to study and apply the teachings of the Holy Scriptures.

As you’re no doubt aware, the Bushes weren’t shy about their faith, George Sr. having spoken at the Southern Baptist Convention in 1991 (his son later doing the same, via satellite) and George W. being outspokenly Christian.

But a lot has happened since W.

Trump’s bringin’ it back — along with prayer — as evidenced at Thanksgiving:

From the very beginning of our nation, Americans have come together to remember our blessings and give thanks to God. This Thanksgiving, we remember more than 200,000 brave Americans who are currently serving overseas. We thank God for every patriot who serves our nation in uniform. We also pause to pray for all of those who have suffered loss this year, especially survivors and families of the innocent Americans who were victims of the horrific and hateful acts of violence. And we pray for everyone affected by catastrophic storms and devastating wildfires that have ravaged communities in California. Every American heart is with those impacted by this terrible tragedy. … We are all thankful for the incredible prosperity booming all across our land. We thank God for the blessing of being American, the joy of spending time with loved ones, and the sacrifices made by the heroes who keep American safe, strong, and free. Thank you, God bless you, and happy Thanksgiving to everyone.

At the White House turkey pardoning ceremony, we saw a similarly reverent (and grateful) Trump:

We are now at the beginning of a national period of Thanksgiving. And as we pause to give thanks for all of the blessings that we’ve been bestowed, it really has been blessing after blessing after blessing. We’re all very thankful. And we also pray for those in need, especially our fellow citizens impacted by the devastating wildfires in California, where I just came back. I’ve never seen anything like it. Probably nobody has. All American hearts are joined with theirs.

We give thanks for the family, friends, neighbors and loved ones who enrich our lives, lift our spirits, and fill our days with joy. And we give thanks to God, who continues to shed his almighty grace upon this magnificent land that we all love so very much. We are truly blessed to be Americans.

As we gather together this week with those we love, we share our gratitude to all of those who spend this holiday very, very far from home, serving in our military overseas. We send our eternal gratitude to the heroes who keep America safe, strong, proud, prosperous, and free. And we ask God to always watch over these incredible, brave Americans as they faithfully defend our nation and as they defend our home.

He’s often portrayed by his political opponents as brash, as insensitive, as a man who surely must think he’s God. But he’s brazen enough to unapologetically acknowledge the existence of a higher power, immune to protest enough to champion prayer, and sufficiently sure in his faith in God to proclaim it to an audience, a nation, a world. And that’s one more thing to be grateful for this Thanksgiving weekend. 2018 may not have been the Year of the Bible, but it’s been a year with a man in the White House who believes it’s the Good Book.

And that’s a good thing for America.

Previous: North Korea uses kids to catch and arrest their Christian parents
Next: 4 ‘American Idol’ alumni who praise Jesus through their music