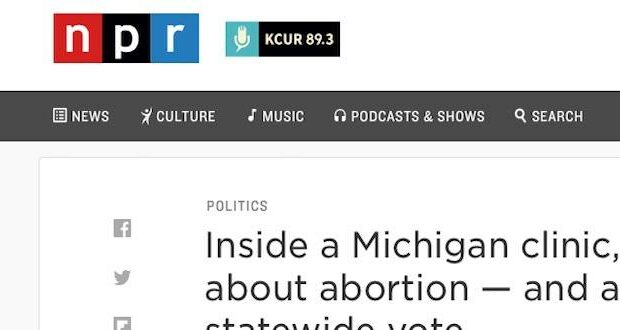 A leading pro-life group will hold a Day of Mourning after a live abortion was broadcast on an NPR radio show. The commemoration will honor the baby killed in the abortion that was broadcast nationally on the taxpayer-funded broadcasting behemoth.

NPR listeners heard a baby being killed in an abortion as the mother moaned and cried. The shocking audio came from an abortion facility in Michigan where an NPR journalist watched an abortionist perform an 11-week abortion. NPR has come under heavy criticism from listeners – both pro-choice and pro-life who became distraught.

In response, pro-life group Priests for Life is calling for Saturday, Dec. 3 to be a Day of Mourning in honor of the child aborted on the Nov. 3 program.

“Pro-life leaders have named the child Baby Amanda Marie and we are asking every pro-life individual, organization and lawmaker to mark the day with fasting and special prayers, including Masses,” said Father Frank Pavone, National Director of Priests for Life. “These actions can be done privately, but the more they are done in common, with groups, the better.”

“The recording picks up the moans of the mother, but her child’s scream is silent,” Father Pavone said.

“The staffer with the mom says ‘You did it,’ and ‘You did great,’ when the killing was complete. There is no mention of the baby who has just died in a brutal way at 11 weeks. The baby’s humanity is not even an afterthought. We have to re-humanize what this abortion and this broadcast de-humanized,” Father Pavone said. “And we have to make a big deal of what this broadcast trivialized.”

The Day of Mourning will honor the baby and also ask God for forgiveness for the legal abortion deaths of more than 65 million children in the U.S. since 1973, he told LifeNews.

Prayers also will be offered for the mother who chose abortion, for the abortionists and the staffers who helped, and the NPR employees who took part in the broadcast.  An open letter will also be sent to the radio network, pointing out the many things about the baby, and about abortion, that the broadcast left out. Interested people are welcome to sign on to the letter.

“So, please join us on Dec. 3 to honor Baby Amanda Marie, and to do our part in recognizing her true dignity,” Father Pavone said.

The npr headquarters of the broadcast went viral on social media.

“I almost didn’t want to tweet this but it’s something everyone needs to know,” XStrategies’ Greg Price wrote, sharing a 2-minute segment of the report on Twitter. “NPR on the radio this morning played audio of a woman getting an abortion. You can hear the vacuum turning on, crying, moaning, and the doctor telling her it’s done. Warning: It’s tough to listen to.”