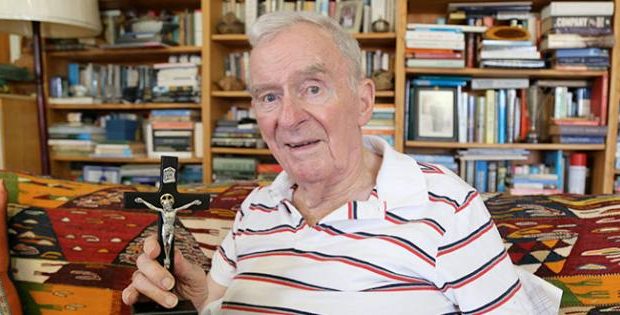 Bill Hayden was one of the world’s most well-known atheists. In fact, the Australian politician  was an atheist all of his life and as an adult would use his public platform to dissuade others from faith.

But something happened to him at the tender age of 85–he turned to God and accepted Christ as his savior.

Hayden was raised by a loving Catholic mother and an abusive father who was an atheist. His father’s strong opposition toward religion had a long-lasting influence on Hayden throughout his life. “I was exposed to and understood what family violence was about,” he said.

He joined the navy, then became a police officer. During that time, Hayden studied economics and joined the Australian political party.

His dislike for the church was tested after the death of his 5-year-old daughter, Michaela, when she was coming home from Sunday school in 1966.

Hayden could not find solace in prayer while mourning the loss of his daughter. “People were writing to me and saying, God in His inscrutable way, does these things and you shouldn’t ask why. He does it for a good reason,” he explained.

When he worked as a policeman, his mother told him that “there’s no such thing as boys that are born mad. The way that people turn out in their lives is determined by their experiences when they are young,” he said.

His understanding of faith began to take shape after meeting Sister Mary Angela Doyle. Her influence came while Hayden was pushing for the introduction of Medibank, now called Medicare.

Sister Mary Angela Doyle contacted Hayden and said that she supported his efforts to build Medibank. “She helped me to get a reputation for which I am proud of. She had a profound influence on me. She’s part of the influence that caused me to become a Catholic, a big part of it,” he added.

“She made me in a way. It was a big breakthrough I was looking for. I wasn’t getting a breakthrough anywhere. God was unreasonable on those things,” he concluded.

Hayden recalled having a conversation with his wife Dallas. “I don’t know if I can keep doing this. I told her I wanted to change,” he said. “It was a big turnaround from where I’d been for so many years and for what I believed in. It wasn’t easy for me to change my belief to Christian belief.”

“I feel better now. In my body, I feel much better and in my mind. I’m looking forward to playing a more active role in the church in Ipswich. I’m part of the church and I feel better for acknowledging that part of it. I’m just another fallible human being. There is only one star in our lives and that’s Jesus Christ,” he concluded.

Watch the full interview with Bill Hayden and Mark Bowling with Star of the World on YouTube.