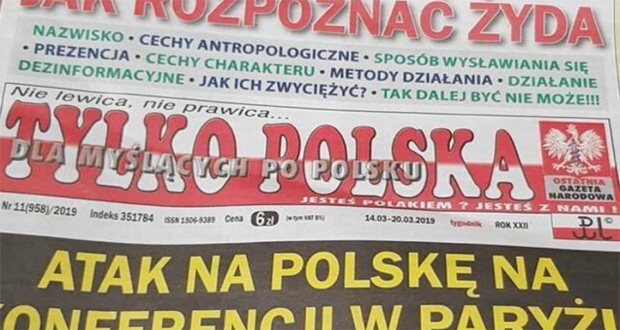 A weekly newspaper that is distributed around Poland featured a front-page article about how to spot a Jew.

Tylko Polska, or “Only Poland,” listed a number of features to look for when identifying a Jew, including, “Names, anthropological features, expressions, appearances, character traits, methods of operation” and “disinformation activities.”

The paper was spotted Wednesday at the lower house of the Polish parliament as part of this week’s collection of newspapers.

According to the Jewish Telegraphic Agency, the paper reads: “How to defeat them? This cannot go on!”

The paper also features a headline reading, “Attack on Poland at a conference in Paris.”

The “attack” refers to a Holocaust studies conference that took place last month. The conference was titled “The New Polish School of Historical Research on the Shoah” and examined Poland’s actions during the Holocaust.

The article about the conference includes a picture of Jan Gross, a Polish-Jewish scholar who argues that Poland was complicit during the Holocaust. Gross discusses the 1941 Jedwabne massacre of Jews, in which Poles participated in the strategic murder of hundreds of Jews.

The Washington Post reported in May 2018 that Poland’s Law and Justice party called Gross “unpatriotic” for his beliefs.

Polsat news reported that Michał Kamiski, a conservative lawmaker, protested the article and its presence at Polish Parliament.

Poland’s parliament responded by saying that it “will request the publication’s removal from the press kit.”

Previous: “The Donut Boy” to make stop in Shawnee County
Next: Branson show ‘NOAH’ will now be in movie theaters for three days only