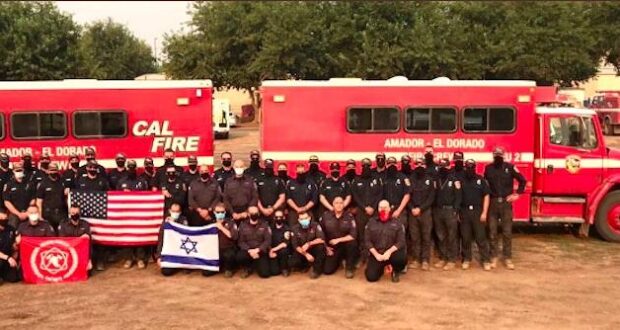 Californians got major help from Israel this week. A team of Israeli firefighters are now on the ground battling blazes alongside their American counterparts.

The cooperation has made history. It’s the first time Israelis have been deployed to fight fires on the ground in the United States, according to Consul General  Shlomi Kofman.

The team, which is composed of 10 individuals from across Israel, even brought their own personal gear.  Kofman helped arrange their visit and met them at the airport with a consular delegation.

Israel’s Foreign Ministry spearheaded and funded the operation in cooperation with the U.S. Embassy in Jerusalem and Israel’s Ministry of Public Security.

California Governor Gavin Newsom tweeted his gratitude for the assistance: “Mutual aid is a beautiful example of people from all backgrounds and communities coming together to help one another. Grateful for the strong partnership between California and Israel, and for this crew of Israeli firefighters who came to CA to help battle these historic fires,” he stated.

Israeli firefighters are some of the world’s best. They have considerable experience in Israeli forests battling blazes started by incendiary balloons sent aloft by Palestinians in the terrorist enclave of Gaza. Palestinians generally target Israel during the summer months, like in California, are the driest and most dangerous season for wildfires.

Bardov said the Israeli offices worked quickly within a 48-hour timeframe to send the 10 firefighters. “Everyone just engaged together and worked together,” Bardov said. “This was really, really quick.”

The leader of the group, Itzik Oz, said that when the call was put out to find volunteers for the job in the United States, all the slots were immediately filled.

“I think most of the firefighters in Israel [volunteered],” Oz joked. He added that while the lightning-sparked fires in California are unique, his team is prepared to respond.

“This is a different kind of fire,” Oz said. “But it’s the same training. Doesn’t matter if it’s a big forest or a small forest. We are ready to do everything. Whatever California’s firefighters]need, we’ll do it.”

As of this week over 16,000 firefighters continue to battle two dozen huge fires across California and more than 60,000 people remain evacuated, according to Cal Fire.

Fires sparked by the lightning siege that started on Aug. 15 have now burned over 1.46 million acres.