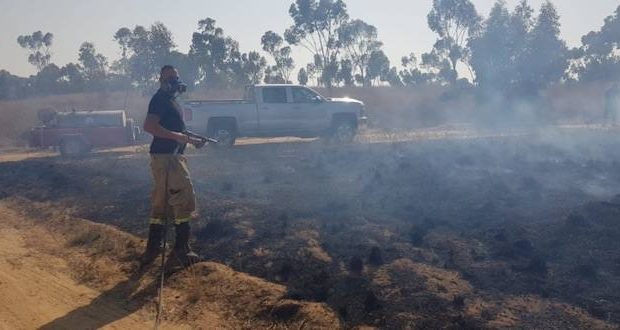 Christians honored in Israel for work in face of terror

The Jerusalem Post newspaper reports Israeli communities near the border with Gaza expressed gratitude on Tuesday to the International Christian Embassy Jerusalem (ICEJ)for their work in responding to terror from the Hamas-controlled area. The organization is providing support and assistance to residents who endured fires sparked by incendiary kites and balloons an almost daily basis since March.

The fires have caused serious damage and have destroyed thousands of acres fields and orchards in the area. Southern residents withstood another summer of rockets as the conflict between Hamas and Israel intensified.

The ICEJ responded by donating 17 all-terrain fire-fighting trailers and seven portable, steel bomb shelters, all in cooperation with their local NGO partner Operation Lifeshield. They continue to work with local residents to find what is needed.

A special ceremony honoring the pro-Israel Christian organization was held in Kibbutz Magen, hosted by Mayor Gadi Yarkoni. The ceremony followed the dedication of a bomb shelter at a youth sports club in Kibbutz Magen, which was donated by the ICEJ-Swiss branch.

The delegation, headed by ICEJ president Dr. Juergen Bueller, visited an IDF observation post overlooking Gaza near Kissufim, where delegates received a security briefing and saw a demonstration of the new fire-fighting trailers being put to work.

“These bomb shelters and fire-fighting equipment are not only about protecting the safety of our people and livelihoods,” said Yarkoni. “They are also about our emotional security. We are so grateful to the ICEJ for helping us in our hour of need this summer.

“It is a core mission of the Christian Embassy to be there for Israelis whenever you face crises and challenges,” said Dr. Buehler. “We know our assistance helps ensure that as you send your children to school and to sports club every day, you do so with the peace of mind that they will be safe. And we so much admire the steadfastness of the residents of this region and how you have stayed strong throughout the years of rocket barrages and now arson attacks.”

The new all-terrain fire-fighting trailers can be used to reach off-road areas inaccessible to regular firetrucks, aiding firefighters to put out blazes deep in the fields and orchards of the Eshkol Region. Eleven trailers were donated by Kenneth Copeland Ministries and Eagle Mountain International Church, and the other six by ICEJ branches in the US, Canada, Finland, Germany, and several other nations.

Six of the new mobile bomb shelters were provided by ICEJ-Switzerland through donations made by the Rudolf & Helga Frei family.

The ICEJ has now donated 70 mobile bomb shelters to the communities that border Gaza over the past 12 years.