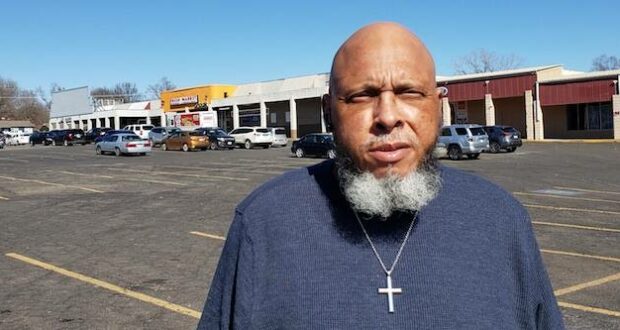 “I forgave the man who shot me,” Anthony White recalls of his chance encounter with the attacker who two years earlier had pulled the trigger.

It was 2002 and White was walking down a street when he glanced at a passing car and saw the assailant. Emotions swelled within him – not feelings of anger but of empathy. The bullet from that 2000 shooting had entered the back of his head and, for a time, left him unable to talk, walk or eat.

“I said to myself that I forgave him,” White recalls of that moment.

The car passed and turned a corner at 49th and Agnes before stopping. The shooter exited, walking towards White.

For White, time seemed to stop once again as the two stood face-to-face on that Kansas City street. “I had the opportunity then to tell him in person that I forgave him. And I did,” says White. The shooter apologized to White and wanted to apologize to White’s family.

But that encounter didn’t end there. White says he prayed with the man who then gave his life to Christ. “I invited him to the church where I was giving my testimony for the first time during a revival the next day.” 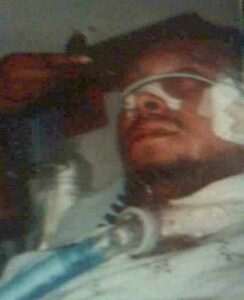 White after the shooting.

White, who was then an Associate Minister at Remnant of God Christian Church in Kansas City, gave his testimony.

The congregation, of course, knew Minister White’s journey and testimony. They knew he had been a shooting victim like countless black men in the urban core; was in the Research Medical Center for 22 days and had been driven there by a friend. “On the way to the hospital, I gave my life to the Lord,” White says.

But White didn’t expect the shooter to show up at church.

I gave my testimony then ended, saying, “The man who shot me is sitting on the back row.” The comment elicited a gasp from the congregation as heads turned and they saw a man rise and walk down the aisle.

He came to the altar and cried. I cried. Everybody cried.

“He came to the altar and cried. I cried. Everybody cried,” White remembers.

But while Anthony White continued to serve the Lord as he has for almost two decades now, it would not be the same for the shooter, who never served jail time for that crime. He would be shot and shoot and kill someone else though, being sentenced to 23 for which he only served 18. He was released in 2020.

White’s own brother Kenny was shot and killed in 1993. Even before White found Christ he knew that something had to be done for the youth of Kansas City. That began a passion for helping kids off the street and into activities that provided paths that didn’t include drugs, shootings, and, ultimately, death. White says that discipleship and offering alternatives are the keys to changing course so they don’t revert back to their former lives.

After the 2000 shooting, White regained the use of his legs and speech and soon joined the church volunteering in the youth ministry and coaching the boys’ basketball team. Coaching wasn’t unusual for him as he had always played sports and coached boys basketball, umpiring Boys baseball, and girls’ fastpitch softball.

Metro Voice readers may also be familiar with the “My Heroes” column Pastor White wrote for the newspaper from 2009 to 2011. It extolled ordinary people quietly serving God as “unsung” heroes.

Pastor White is looking for some help from some new “unsung heroes.”

He and his wife Gail have launched the Safe Haven Outreach Center. It will have an Open House on Friday, March 5 and March 12 at the Milestone Gym at 3417 E. 12th St. in Kansas City, Mo.

Gail, who has worked for the U.S. Government for 29 years, serves as Assistant Director and designed the new ministry’s logo. “I couldn’t do it without her,” he states.

White says the new effort, which is a 501(c)(3), will provide educational assistance such as tutoring, sports opportunities, nutrition and wellness as well as other extracurricular activities. The youth outreach efforts will officially launch Friday, March 19, 2021, and take place each consecutive Friday from 4-6 pm.

Some of those at-risk youth you typically find in group homes. White worked with a group home serving emotionally challenged youth for 10 years and developmentally disabled adults for five years. He eventually supervised a facility. The experience showed him that these individuals may often be homeless before they are rescued by such group homes.

White says that was first-hand experience of how youth programs and homeless outreach can change lives. When he pastored The Great Commission Outreach ministry between 2010 and 2013, the church served an area with a high homeless population.

The people that received our help became active members of the church and the community.

“The people that received our help became active members of the church and the community,” he states. He also recalls the experience gained as a Chapel speaker at City Union Mission. There he also signed up homeless families for food and shelter needs.

“People don’t realize it but a lot of black youth are homeless,” he says. “It often doesn’t leave them with many options and contributes to a many of the problems facing the city.”

And he’s no stranger to the plight of the homeless. He says he experienced homelessness himself in the past, and that the simple act of reaching out can end up saving lives.

For those interested in learning more, donating equipment, time or other resources, an information meeting is planned for Wednesday, March 5 at 6:30. The location will be the ministry’s new South Kansas City location next to Family Dollar at Longview Road and Blue Ridge.

For information call Pastor White at 816-337-5025 or visit their Facebook page HERE.