Home / Health and Wellness / Once near death, little girl is celebrating miracle of Christmas with new liver and kidney 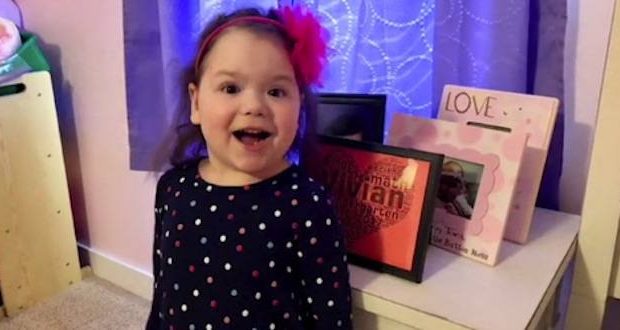 Once near death, little girl is celebrating miracle of Christmas with new liver and kidney

For most families, Christmas gifts are usually found under a tree that’s adorned with tinsel, lights and shiny bulbs. But for one Missouri family a new liver and kidney transplanted into their young daughter was the most special gift of all.

This Lemire family will celebrate their nine-year-old daughter Vivian’s birthday later this month right before this they celebrates Christmas. Then on December 31 the Lemires will ring in the New Year by remembering their post-transplant homecoming two years ago. These December celebrations are made possible by another family, complete strangers, who chose to donate their child’s liver and kidney during the most difficult of circumstances. 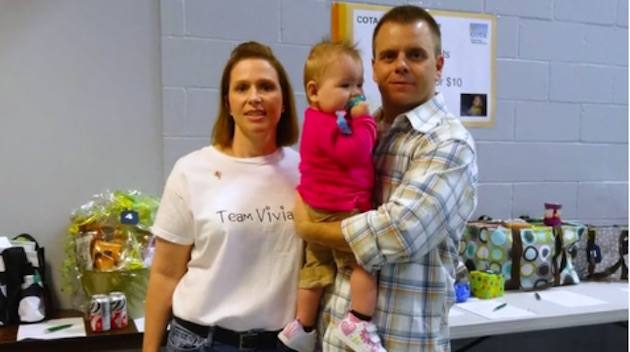 Cara and Rich Lemire are no strangers to loss nor to big gifts — especially ones that are life-saving. When they found out in 2010 they were pregnant with a daughter they would name Vivian (which means full of life), they were excited and anxious. Four years earlier, they had lost their first child to Autosomal Recessive Polycystic Kidney Disease (ARPKD). The condition caused their first baby’s kidneys and liver to swell and take up space the lungs needed to grow properly. Cara and Rich were completely unaware of her condition before her birth and they only had two days with their daughter, Renee, before she passed. They allowed themselves time to grieve before considering another pregnancy, but with support from their medical team they decided to try again.

According to Cara, “Once we were pregnant again we were thrilled, but we struggled to let ourselves feel we could ‘get ready’ for her. We had walked this journey before and worried it would lead to the same heartbreaking place. Vivian’s early ultrasounds showed no sign of the disease and we felt encouraged about not experiencing a recurrence.”

ARPKD is a rare inherited childhood condition where the development of the kidneys and liver is abnormal. Over time either of these organs may fail. Even though it’s rare, it is one of the most common kidney problems to affect young children. It is estimated that 1 in 20,000 babies is born with it; both boys and girls are affected equally. The condition often causes serious problems after birth.

At Cara’s 32-week pregnancy check, an ultrasound showed that Baby Vivian’s kidneys were enlarged with cysts and her amniotic fluid was dangerously low. The Lemires were devastated when they were told the baby also had ARPKD. “It was a crushing moment, but we were determined to give Vivian the best chance we could at survival,” Cara said. 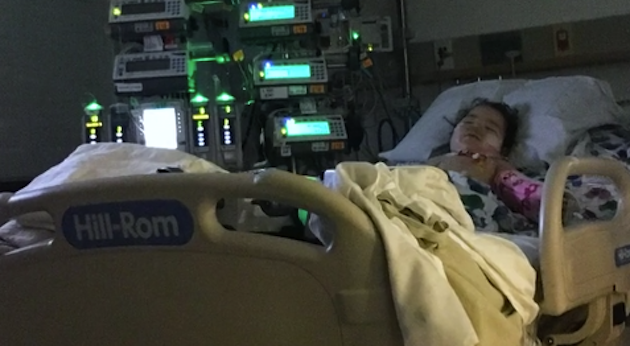 When the baby’s heart muscles began to show signs of hypertension, the doctors determined they could not wait any longer and Vivian was delivered a few days before Christmas 2010. Her lungs had some underdevelopment but she was able to breathe with minimal assistance. Vivian’s next challenge was severe hypertension and renal failure with kidneys that were estimated to be the size of adult kidneys in her tiny body.

At two weeks old, Vivian had her first kidney removed and began dialysis 24 hours a day. Four weeks later Vivian had her second kidney removed. The Lemires had to travel 40 minutes from their O’Fallon, Missouri, home to Cardinal Glennon Children’s Hospital in St. Louis four days a week for Vivian’s hemodialysis. Each session was four hours long. Vivian spent 278 days of her first year of life inpatient enduring several surgeries, battling infections and treating complications of her compromised immune system. Vivian’s medical care made it nearly impossible for both Cara and Rich to keep their full-time jobs; therefore, Rich decided to step back from his career to manage Vivian’s medical schedule of appointments, treatments, specialists, back-and-forth commutes and many more of her complicated medical demands.

Cara and Rich knew Vivian would need a dual life-saving transplant (kidney and liver) for long-term survival. At the start of 2012, while in the midst of Vivian’s hemodialysis sessions and appointments, a transplant social worker suggested Cara and Rich reach out to the Children’s Organ Transplant Association (COTA) to learn more about fundraising for transplant-related expenses. On January 31, Cara called the organization’s 800 number and completed a patient agreement the very next day.

COTA uniquely understands that parents who care for a child or young adult before, during and after a life-saving transplant have enough to deal with, so COTA’s model shifts the responsibility for fundraising to a community team of trained volunteers. COTA is a 501(c)3 charity so all contributions to COTA are tax deductible to the fullest extent of the law, and COTA funds are available for a lifetime of transplant-related expenses.

On March 8, 2012, a fundraising specialist travelled to the Lemire’s hometown to train the volunteers for the COTA campaign in honor of Vivian. This group of family members and friends, named COTA Miracle Makers, quickly got to work organizing fundraisers to help with mounting transplant-related expenses. Numerous fundraisers were held and the team surpassed its $60,000 goal in a short amount of time.

“We will never forget the moment our nephrologist, whose guidance we trusted, told us if Vivian were her child, she would take her to Lucile Packard Children’s Hospital at Stanford,” Cara said. Soon after that recommendation, the Lemires flew to Palo Alto, California — more than 2,000 miles away from their Missouri home. Cara says at their very first meeting ‘everything clicked.’ The Lucile Packard transplant team agreed that, when the time came for Vivian’s dual transplant, the Lemire family would need to temporarily relocate to California and start her transplant treatment plan.

In August 2017 after two years of being listed and a near match, the Lemires finally got the call for both a kidney and liver match for Vivian in California. Cara remembers feeling like their bags were in their hands before they even hung up the phone. It was indeed the call they had been waiting for since the day Vivian was born. On August 9, 2017, Vivian received a kidney and liver transplant and her second chance at life.

The dual organ transplant went well but required a longer recovery time for Vivian, which meant the family would be in California for an extended period of time. Cara took a leave from her job and the family was able to stay in the Ronald McDonald House very close to Lucile Packard. “With our home and jobs halfway across the country, COTA eased the financial burden and enabled us to be at Vivian’s side during her transplant and lengthy recovery,” they said. 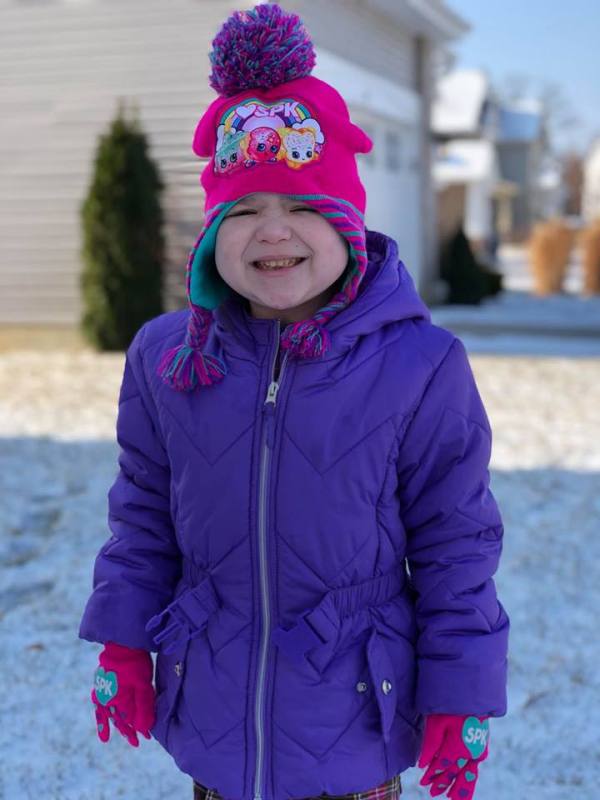 On December 31, four and a half months after her life-saving dual kidney and liver transplant, Vivian and her parents were able to return home to Missouri. It was indeed a positive way to step into the New Year and their new post-transplant life.

“Even before Vivian was born, we knew a transplant was likely in our family’s future. When it became clear the best outcome of Vivian’s transplant would be achieved at a transplant center more than 2,000 miles away from our home, we also knew we were going to need help to make everything work financially. With home and jobs halfway across the country, COTA eased the financial burden and enabled us to be at Vivian’s side before and after transplant. It is a tremendous gift to know COTA is here for our family now and will be … for a lifetime,” said Cara and Rich.

Today Vivian is enrolled in elementary school, which she loves and where she is thriving. She loves dancing, singing and participating in any type of music. Vivian is thrilled to be making new friends at school. This Christmas will likely be full of celebration and joy for the Lemires as they enjoy the holidays in their own home. Vivian is indeed a gift for Cara and Rich who went from wondering when The Call would come to now watching their beautiful daughter enjoy the sights, sounds and tastes of the season. They will indeed remember their special donor angel this holiday season as well.

For more information about the Children’s Organ Transplant Association (COTA), or to find a COTA family in your area, please email kim@cota.org.

Previous: What do Blue Zones and successful families have in common?
Next: Democrats today set to vote giving Judea and Samaria to Arabs