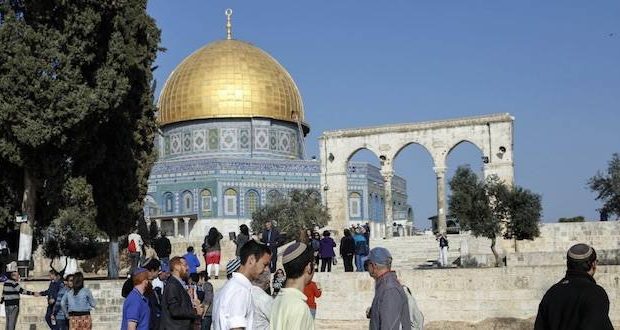 Jews walk peacefully on the Temple Mount, former home to the Second Temple before it was destroyed by Rome in 70 AD.

Jews will be banned from the Temple Mount, the holiest site in Judaism, if Palestinian ceasefire demands are met.

Jordanian and Egyptian foreign ministers Tuesday were given the demands by Palestinian Authority President Mahmoud Abbas in discussions about ceasefire details between the terrorist group  Hamas and Israel.

Abbas met in Ramallah with Foreign Ministers Sameh Shoukry of Egypt and Jordan’s Ayman Safadi before meeting with U.S. Secretary of State Antony Blinken, who arrived in Israel Monday for a 3-day visit to the region. Both Jordan and Egypt have peace treaties with Israel.

READ: Here’s what you need to know about the Israel-Hamas conflict.

The Palestinian leader repeated a longstanding Arab demand that Jews must stop visiting the al-Aqsa Mosque compound on the Temple Mount in Jerusalem, considered a holy site by both Jews and Muslims. 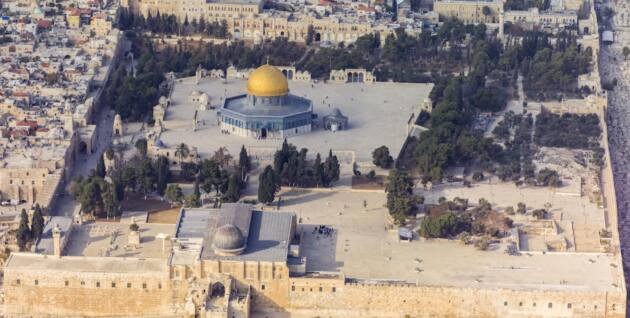 The Temple Mount was the site of the Jewish Second Temple.

Palestinian officials have for decades waged a battle to gain religious control of the mosque, which was granted by Israel to Jordan in the wake of the 1967 Six Day War. That was the war in which six Arab nations attacked Israel but the tiny Jewish state won and ultimately captured the Old City of Jerusalem which had been under Jordanian occupation since 1948.

Abbas and radical Muslims contend that Jews on the Temple Mount amount to “attacks and incursions by extremist settlers, backed by the Israeli occupation forces,” the Jerusalem Post reported.

Israeli security officials on Sunday allowed a resumption of visits to the Temple Mount by Jews after a three-week ban due to Arab violence in Jerusalem.

Palestinians routinely report that Jewish “settlers” are “storming” the Al Aqsa Mosque any time a group of Jewish visitors or tourists goes to the site under police escort. However, the Jews only stay in the courtyard above the Western Wall, or Kotel, of the Jewish Temple and never enter the mosque itself.

Prime Minister Benjamin Netanyahu said earlier this month that only Israel guaranteed access to the holy sites for all religions, even though Jews are restricted on the Temple Mount.

“It could be said that in the long history of Jerusalem, only under Israeli sovereignty since 1967 have we witnessed a prolonged, stable and safe period in which we have been working to ensure freedom of worship and tolerance for all,” Netanyahu said.

Although Jews are permitted to visit the Temple Mount, they are not allowed to pray there – a self-imposed violation of Israel’s promise to ensure access to all holy sites in Jerusalem for all religions.