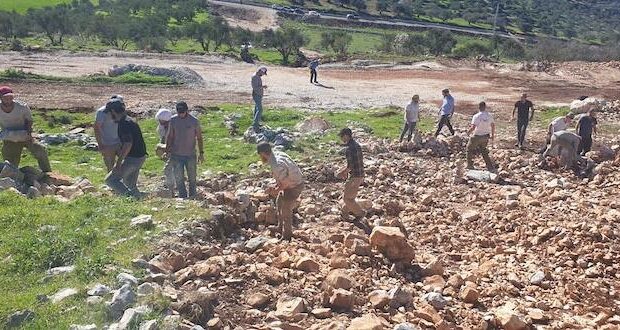 Jews and Christians work to salvage the site of Joshua's Altar after it discovered to have been bulldozed by the Palestinian Authority.

The Palestinian Authority is under fire after it purposely began destroying the remains of Joshua’s Altar on Mount Ebal.

Archaeologists discovered the destruction of the compound when visiting the site late this week.

The investigation by local Jewish residents, archaeologists, and Israeli authorities found that the PA had ground-up building stones from the site into gravel for a new road and destroyed a stone wall surrounding the area. 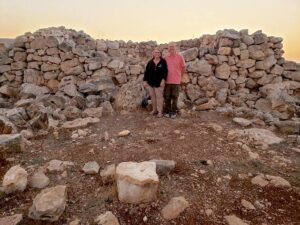 Dwight and Anita Widaman at Joshua’s Altar in 2019.

Antiquity experts and archaeologists had confirmed the site as the one described in the Bible, where Joshua divided the new land among the 12 tribes. It is considered a national heritage site by Jews and Christians but problematic for Arabs because it connects the Jewish people to the land 3,200 years ago. Palestinians claim the land was never inhabited by Jews. The Book of Joshua describes how the Israelite leader built an altar on Mount Ebal, acting on instructions from Moses after the Israelites had crossed into the Land of Israel.

The altar had been under the careful watch of many, including Aaron Lipkin.  Metro Voice publishers Dwight and Anita Widaman visited the site with Lipkin in November of 2019. Lipkin is an archaeologist and owner of Lipkin Tours which Metro Voices partners with in organizing tours to Israel that regularly take guests to sites like this.

“What they [the Palestinians] did, what they said to themselves was ‘We don’t care about this place. It’s holy to the Jews. It’s holy to the Christians. Let’s just come and take the stones and use it for gravel,’” Lipkin said in a video posted to Facebook on Feb. 11. “This is the way Islam respects the holy sites of Jews and Christians.”

Lipkin said it reminded him of the period between 1948 and 1967 when Jordan occupied East Jerusalem. “The Jordanians desecrated the Jewish cemetery on the Mount of Olives and took the tombstones and used them for urination sites for their soldiers.”

Lipkin, who was visibly upset by the destruction he saw took drone footage of the site and posted them to his Facebook page.

Research has found the area to be a unique ritual site used to offer sacrifices. The dating of the altar to the period of the Israelites’ entry into the land, the similarity between the structure excavated and the altar described in the Torah, and the fact that only kosher animal bones were found at the site led the researchers to conclude that this is the altar of Joshua (Yehoshua ben Nun) built on Mount Ebal.

READ: DNA shows Palestinians were from Europe, not the Middle East.

Road construction had been approved by Israeli authorities, which require builders to submit plans and to ensure the preservation of historical sites. The PA apparently ignored those plans and, some say, purposely worked to destroy the site out of political reason.

The Shomrim Al Hanetzch (Preserving the Eternal) organization found a video posted on the Facebook of a nearby Palestinian village showing the PA used bulldozers causing significant damage.

Shomrim Al Hanetzch, which is dedicated to preserving Jewish archeology, history, and heritage in Judea and Samaria, noted that the physical damage to the biblical site is part of a Palestinian plan to erase evidence of Jewish biblical sites, thus discouraging Jewish and Christian visits to areas of religious importance. 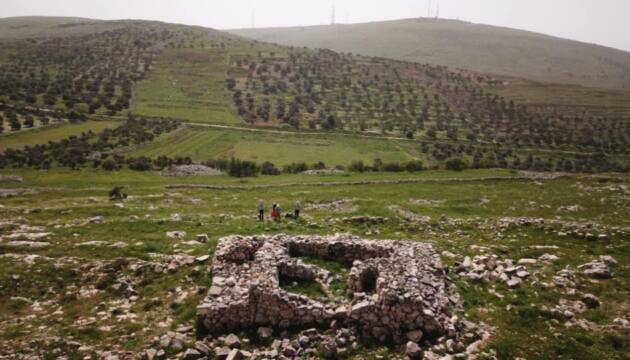 The Palestinian Authority contends that the biblical altar is a falsification of what they call the Palestinian history. But their claim is not borne out by history or archaeology. The name Palestinian is a Roman term given to all residents of what Romans named Palestine and did not denote a separate people. Up until the 1948 war of Independence, all residents living in what would become Israel called themselves Palestinian – Jews, Christians and Muslim Arabs. After the Israel once again became a nation after 2,000 years, residents took on the national self-identifier “Israeli” while Arabs continued to use the term “Palestinian.”

Guy Derech, director of activities at Keepers of Eternity Shomrim Al Hanetzch, says the site of the altar is “one of the most important sites in our country and of special importance to the heritage of the Jewish people. Crushing thousands of years of cultural assets into gravel is a very serious act that is unthinkable in the modern world.”

Yossi Dagan, head of the Samaria Regional Council called on the Israeli government to immediately halt the destruction.

“This is a direct and unfortunate continuation of the contempt of all those concerned regarding the historical sites of the Jewish people and the State of Israel,” Dagan said. “It is shocking to see how the Palestinian Authority is rudely destroying the archeological sites that are dear to all of humanity.”

“This really aches, this really hurts,” Aaron Lipkin said, pleading with the Israeli government to step in and protect Joshua’s Altar.