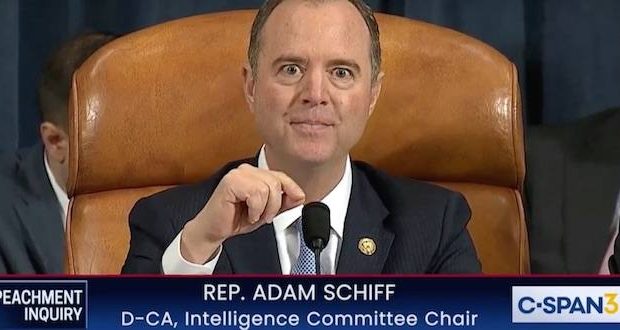 Report: Impeachment effort based on ‘hearsay, presumptions, and speculation’

The Democrats impeachment of President Donald Trump rests entirely on secondhand evidence, assumptions, and speculation, according to a report released by House Republicans on Dec. 2.

Republicans released the thorough 123-page report (pdf) as House Intelligence Committee Democrats were finalizing a report of their own, which was expected to be presented soon before the House Judiciary Committee. Trump said he read the Republican report during his flight to the United Kingdom.

Republicans have determined that the Democrats have failed to substantiate the allegation at the core of the impeachment inquiry: that Trump sought to boost his reelection chances by pressuring Ukraine to investigate former Vice President Joe Biden.

While Democrats assert that the allegation has been proven, during the past several weeks, no witness has offered firsthand evidence of Trump exerting pressure or conditioning any official act on Ukraine’s compliance with his request. In fact, Democrat witnesses testified that Trump never asked them to pressure and in fact stated he “wanted nothing” from Ukraine.

“The evidence does not support the accusation that President Trump pressured President Zelensky to initiate investigations for the purpose of benefiting the President in the 2020 election,” the report stated.

House Republicans have long denounced the impeachment probe as an attempt by Democrats to undo the outcome of the 2016 election. The report — prepared by Republican staff for Rep. Devin Nunes (R-Calif.), Rep. Jim Jordan (R-Ohio), and Rep. Michael McCaul (R-Texas) — reasserts this claim.

“The Democrats’ impeachment inquiry, led by House Intelligence Committee Chairman Adam Schiff, is merely the outgrowth of their obsession with re-litigating the results of the 2016 presidential election,” the report stated. “The evidence does not establish any impeachable offense.”

Democrats say impeachment is the only constitutional tool designed to counter corruption by an elected official. Some have suggested that direct evidence is lacking because the Trump administration has refused to comply with subpoenas for documents while some of the key witnesses — including the president, his personal attorney, Rudy Giuliani, and former Energy Secretary Rick Perry — have refused to testify.

Schiff wrote on Twitter on Dec. 3 that the stonewalling by the White House amounts to “obstruction of Congress.”

“Evidence of Trump’s obstruction of Congress is overwhelming,” Schiff wrote, without offering evidence. “If we allow it to succeed, it will mean future presidents can simply ignore Congressional subpoenas & oversight, Fundamentally altering the balance of power and paving the way for unchecked corruption and malfeasance.”

The Republican report counters the obstruction charge by suggesting that the White House is within its rights to assert executive privilege, especially amid a hyperpartisan impeachment process in which the president hasn’t been granted due process to defend himself. Schiff conducted closed-door impeachment hearings for nearly a month before the full House of Representatives authorized the inquiry in a party-line vote.

“President Trump’s assertion of longstanding claims of executive privilege is a legitimate response to an unfair, abusive, and partisan process, and does not constitute obstruction of a legitimate impeachment inquiry,” the report stated.

In addition to the central allegation that Trump pressured Ukraine to investigate Biden, Democrats claim the president withheld aid to Ukraine and dangled the prospect of a White House meeting as leverage to force Ukrainian President Volodymyr Zelensky to comply with his request. Both Trump and Zelensky have repeatedly said there was no quid pro quo or pressure.

The report points to witness testimony that suggests Trump was skeptical about Ukraine due to its history of corruption long before he ordered a hold on security aid. The Republicans also argue that Trump had a valid concern about Hunter Biden’s role on the board of Ukrainian gas company Burisma Holdings while his father, Joe Biden, served as the vice president of the United States.

Trump brought up Hunter Biden during the July 25 call with Zelensky, which is now at the core of the impeachment inquiry. Trump asked Zelensky to “look into” the firing of Ukrainian Prosecutor General Viktor Shokin.

In early February 2016, Shokin’s office seized the assets of Mykola Zlochevsky, the owner of Burisma. At the time, Hunter Biden had held a paid position on the board of Burisma for nearly two years. Weeks later, Shokin was forced to submit his resignation.

Joe Biden has bragged about forcing Shokin’s ouster by withholding $1 billion in loan guarantees from Ukraine. State Department official George Kent testified that he flagged his concerns about Biden’s role in Burisma in early 2015.

In addition to assessing that the evidence collected so far doesn’t substantiate key claims by Democrats, the Republican report also underlines the lack of evidence behind some of the secondary claims put forth by Democrats.

The Republicans, some of whom have compared the impeachment to a soft coup, concluded there is no evidence to establish that the president orchestrated a so-called “irregular channel” to implement Ukraine policy. The three officials who were part of the alleged “irregular channel” — Ambassador Gordon Sondland, Special Envoy Kurt Volker, and Secretary Perry — all had official responsibilities tied to Ukraine and reported regularly to the National Security Council and the State Department, the report stated. In essence, their contacts were regularly reported to government watchdog groups who found nothing unusual about the diplomatic efforts.

The report also noted witness testimony that contradicted a claim in the anonymous complaint that triggered the impeachment inquiry. The complaint stated that the White House sought to fence off the transcript of the Trump–Zelensky call, in a bid to shield the president, by moving the document to a classified system. But Tim Morrison, an adviser to the president, testified that the move to the classified system was the result of an administrative mistake.

The White House released the official transcript (pdf) of the July 25 call one day after House Speaker Nancy Pelosi (D-Calif.) announced the beginning of the impeachment inquiry. Trump and his supporters have pointed to the transcript as the ultimate evidence that no wrongdoing took place.

“At the heart of the matter, the impeachment inquiry involves the actions of only two people: President Trump and President Zelensky,” the report stated. “The summary of their July 25, 2019, telephone conversation shows no quid pro quo or indication of conditionality, threats, or pressure — much less evidence of bribery or extortion.”

Previous: From the Heartland to the Holy Land tour to Israel!
Next: Church and nightclub team up to serve the hungry on Thanksgiving