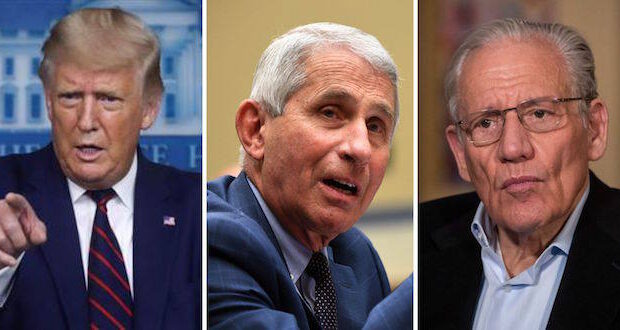 Media outlets and Democrats are accusing President Donald Trump of lying as he worked to avoid panic during the early months of the coronavirus. But the “bombshell” book  by Bob Woodward is being discredited by the scientists in the room at the time.

Dr. Anthony Fauci, the top health expert in the Trump administration, said during a Fox News appearance on Wednesday: “I didn’t get any sense that he was distorting anything.”

“He really didn’t say anything different then we discussed when we were with him,” he said. “I may not be tuned into the right thing that they’re talking about, but I didn’t really see any discrepancies between what he told us and what we told him and what he ultimately came out publicly and said.”

The Trump administration was navigating a mine field between giving too much speculative information and countering incorrect media reports and spreading fear and encouraging the public to go about their lives without too much disruption.

White House officials are responding to media reports, saying the president was projecting calm in February when speaking about the new virus from China in part because of concerns about a mass panic that could have left grocery store shelves bare and crashed the economy. The White House said on Wednesday. Trump’s caution and optimistic view of the virus also gave state medical officials and hospitals time to ramp up and prepare for actual cases rather than a panic-driven flood of individuals who actually didn’t have the virus.

But the nation’s top coronavirus response experts say the calm that Trump displayed to the public did not reveal the serious response it was administering on the ground.

Other media outlets this week have declined to interview Fauci after he defended Trump’s response to the virus.

READ: CDC says only 6% of deaths from Covid as primary cause

Trump told journalist Bob Woodward on Feb. 7 that the COVID-19 virus “is deadly stuff,” according to Woodward’s new book. He said the virus was “more deadly than even your strenuous flu.” That was true at the time, with a death rate of 5 percent, as medical officials experimented with the best treatments. Morbidity is currently .04% from Covid only and just under 1% when it is listed as a cause of death for individuals who were already experiencing other life-threatening issues such as cancer or auto accidents.

That same month, Trump contrasted the new virus with influenza, telling reporters at the White House: “The flu, in our country, kills from 25,000 people to 69,000 people a year. That was shocking to me. And, so far, if you look at what we have with the 15 people and their recovery, one is pretty sick but hopefully will recover, but the others are in great shape. But think of that: 25,000 to 69,000.” His words echoed what medical experts were also publicly stating as information was being collected about its severity.

“This president does what leaders do, good leaders. It’s: stay calm and resolute at a time when you face an insurmountable challenge,” she said.

“The president has never lied to the American public on COVID. The president was expressing calm and his actions reflect that,” she added, pointing to the Centers of Disease Control and Prevention issuing a travel notice for Wuhan on Jan. 6, before any confirmed CCP virus cases in the United States, and Trump banning non-Americans from traveling to the United States from China on Jan. 31.

The ban led to an 86 percent drop in travel from China to the United States.

Political analysts are reminding media outlets that Democrats were voting on impeachment as Trump made historic moves to stop travel to the U.S. from coronavirus hotspots.

The House of Representatives impeached the president on Dec. 18, 2019. Democrats delivered the articles of impeachment to the Senate on Jan. 15. Trump was acquitted by the Senate on Feb. 5 following a weekslong trial during the first few weeks of the virus.

“This president embodied the American spirit, that when we face a challenge, a crisis, a pandemic, we come together, we can be optimistic. We can be serious about it, we can take it seriously with our actions, which is what this president does, it’s why we lead the world in testing, doing far more than number two, which is India. He took this seriously, but he still expressed calm,” McEnany said.

“Our food supply chains were at risk, we could not have mass runs on grocery stores. The markets, also, the economy was in play here, we didn’t want there to be a huge crash and panic.”

Trump made a similar comment to Woodward in mid-March, telling the journalist: “I wanted to always play it down. I still like playing it down, because I don’t want to create a panic.”

Doctors, speaking on some national news outlets on Wednesday, inferred that the actions of the Trump administration provided valuable time in preparing their facilities for an influx of patients.

Sen. Lindsey Graham pointed to Feb. 29 comments that Dr. Anthony Fauci made on the “Today” show where he said that there was “no need” for people to change their lifestyles “at this moment,” though Fauci also warned about the threat of “community spread” from the coronavirus and cautioned that the risk level “could change.”

The Woodward interview with Trump comes out next week but was released to media this week as mail-in voting ballots begin to go out.