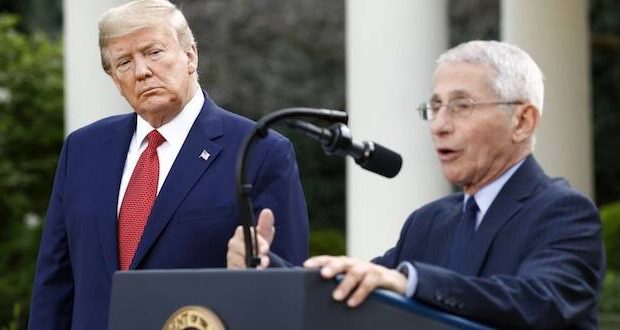 Dr. Anthony Fauci said in an interview released Thursday that President Donald Trump took the coronavirus threat seriously “from the beginning” of the pandemic. His comments were in sharp contrast to media and Democrat leaders’ criticism that now seem based more on  politics than facts.

“I think he always understood the seriousness of it. Right now as the numbers are becoming crystal clear, he himself is articulating an awareness of that seriousness,” Fauci said in an interview on “The Daily,” a New York Times podcast.

“But from the beginning, he always took it seriously.”

“The President has his own style, that’s obvious to the American public. When I speak to him about issues that are substantive he listens.”

Trump’s critics have accused him of downplaying the threat from coronavirus, which began as an outbreak in Wuhan, China, in November 2019 and has since spread across the globe.

Trump said in the early days of the U.S. outbreak that health officials had the virus under control and would likely be able to contained the pandemic.

“And again, when you have 15 people, and the 15 within a couple of days is going to be down to close to zero, that’s a pretty good job we’ve done,” he said at a Feb. 26 press conference when the U.S. had recorded only 15 cases of coronavirus.

As of Thursday, the United States has reported more than 216,000 cases of COVID-19, the disease caused by coronavirus. More than 5,100 Americans have died.

Trump in recent days has struck a more alarming tone about the coronavirus threat.

“This is going to be a very painful — a very, very painful two weeks,” he said at a press conference on Tuesday.

Fauci credited Trump in the podcast interview for shutting down travel from China in January.

–Content created by The Daily Caller News Foundation is available without charge to any eligible news publisher that can provide a large audience.

Previous: Daily News Update: Intel confirms China hiding deaths; Cats can get virus
Next: Here’s what you need to know about your stimulus package