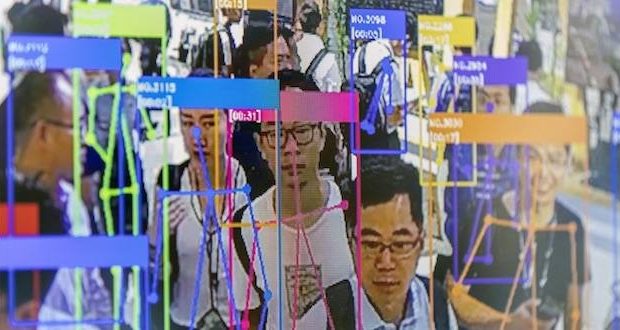 Imagine facial recognition technology to get into a house of worship and surveillance cameras inside watching every move of the Christians there.

Or a “social score” system that awards points for good citizenship — and deducts them for sharing one’s faith, leading to penalties such as limiting where parents can send their children to school.

It’s not the plot of a blockbuster dystopian film or “Left Behind” novel.

It’s the dawning reality for people of faith in China as described by David Curry, president and CEO of Open Doors USA.

This year, the Christian watchdog organization is highlighting the “rise of the surveillance state” and its impact on Christians and Muslims in China along with its 2019 World Watch List, released Wednesday (Jan. 15).

That’s because it could have “wide implications for the future,” Curry said.

“What they’re doing is creating a roadmap of persecution. This is a blueprint that they will sell and use in other countries,” he said.

The organization’s report notes that an estimated 1 million Uighur Muslims have been detained in China.

And while it seems impossible for the country to detain its 90 million Christians, the report said, it could monitor them using developing technology, going digital with religious persecution. Already, there are areas in China installing cameras and facial-recognition technology in state-controlled Three Self Patriotic Movement churches and testing a Social Credit System.

Still, China is not among the top 10 in Open Doors’ ranking of the countries where Christians faced the most persecution for their faith in 2019. It’s ranked No. 23.

North Korea leads the organization’s annual World Watch List for the 18th straight year, “because they, of course, control every element of life and church, and Christians are the number one enemy of the state,” Curry said. 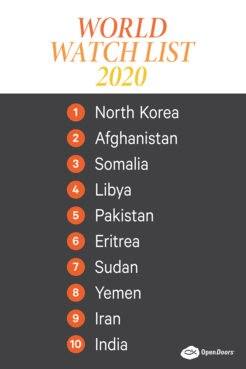 The rest of the lineup remains largely unchanged from last year, with Eritrea and Sudan flip-flopping spots.

Those 10 countries where Open Doors reports Christians are most persecuted include:

The spread of Islamic extremism, one of the main trends Open Doors noted in the report accompanying its watch list, has held many of those countries in place, according to Curry.

“But that’s not to say it’s remained static. These are very fluid situations,” he said.

Almost all of the 50 countries on the World Watch List are in Asia and Africa except for the Russian Federation, ranked No. 46, and Colombia, ranked No. 41.

Most of the countries in the top 10 have been there since 2015, which, at the time, Open Doors proclaimed to be the “worst year in modern history for Christian persecution.”

The persecution has gotten “much worse” since then, Curry said. 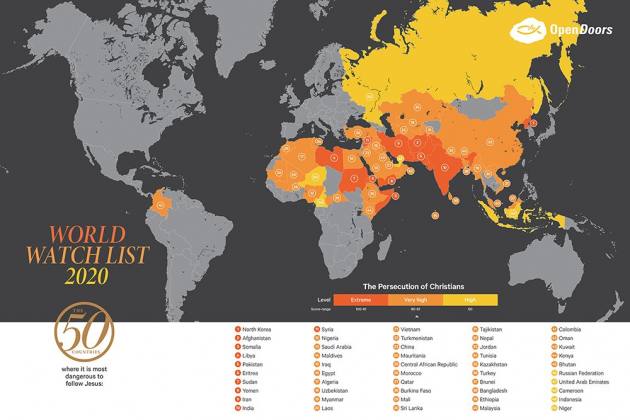 “It’s just wider, more ingrained,” he said. “There’s not as many people who were killed this year that we can document, so in some ways the ultimate violence is down, but attacks on churches and rapes of Christian women still remain very high.”

In the 50 countries on the World Watch List, 260 million Christians were affected by extreme levels of persecution last year, up from 245 million the year before, according to Open Doors.

And time will tell what impact the actions taken by President Trump in Iran and Syria, ranked No. 11, will have on Christians in those countries.

The organization has been hearing from Syrian Christians since October, when Trump withdrew U.S. troops from an area along the Turkish border where many Christians had fled ISIS. At least 40,000 Christians were “directly affected” when Turkish forces moved into the former safe zone in northeastern Syria, according to the report.

“Turkey has an agenda. They would like to get rid of the Christians in that region,” Curry said.

Since a ceasefire was declared in the region, he said, those Christians are “more optimistic that maybe there will be some peace.

“They’re really torn as to whether they should stay or go, so we’ll see how this plays out and if they can truly settle into their home.”

Curry said he hopes policy makers will take note of the watch list. Human rights violations in countries like China and Saudi Arabia (No. 13) need to be addressed if the United States is going to sign trade deals and have “normalized relationships” with them, he noted.

He hopes American Christians will pray for the persecuted church around the world.

And he hopes people will “wake up to the importance of religious freedom.”

“People should have the right to think what they want and practice the faith of their choice freely.”