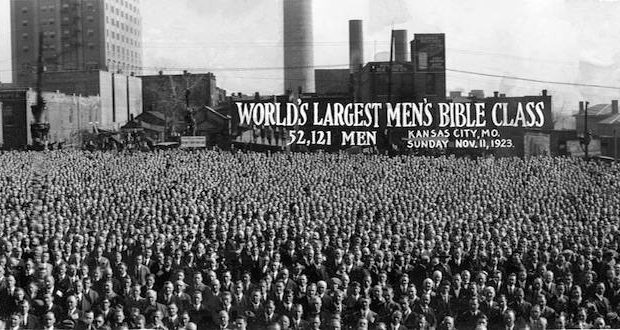 Just a section of a large horizontal photo showing over 50,000 men gathered for a Bible class.

Did you know Kansas City’s Brookside neighborhood is Christian? At least, its houses are. Baptist, to be precise. Behind the magical peaked roofs and Tudor-style European designs, their architect was a strong Christian who led First Baptist Church of Kansas City in the world’s largest Business Men’s Bible Class. 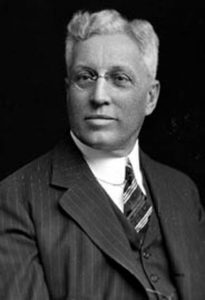 Brookside is one of the most scenic neighborhoods in Kansas City, with lines of cars driving through during the holidays to see the Christmas lights on the fairytale homes, reminiscent of gingerbread houses in the snow. These iconic homes were designed by N. W. Dible, who built his houses to last.

The sloped roofs, arched doorways and circular towers were trademarks of Dible’s designs in the 1920s.

The book The Spiritual Roots of Kansas City: Discovering the Past to Shape Our Future (see affiliate link below) tells Dible’s story. He was well known in Kansas City as an architect, and his Tudor style houses still fill Ward Parkway and the Brookside and Waldo areas. He had four basic floor plans, and his goal was to build affordable, well-built homes. His company made their profit by selling homes at a low price but selling lots of them. Dible kept a tight rein on his business: “He called his salesmen after dinner each night for a daily report, asking each one, ‘What’s it going to be, steak or hot dogs?’” writes historian Susan Jezak Ford. 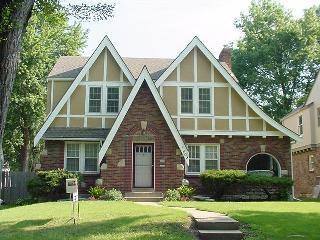 A Dible tudor home which is common throughout Brookside.

Dible was hard-working and disciplined. Ford writes, “Dible followed a rigorous schedule in his business and personal life. He never took a day off work, ate his meals at the same time every day, and did one hundred push-ups a day into his 80s.” His hard work paid off. His company built over 5,000 homes in Kansas City, leaving his trademark housing style in many neighborhoods. Over a fifty-year period, Dible’s company planned out and built thousands of homes both in Kansas City and in the suburbs.

He took pride in making them built to last. A hundred years later, his houses are still in demand for their high quality that has endured through time.

Dible carried this same dedication and ambition from his housing business into his service at his church. In the 1920s, it was popular for churches to have a businessmen’s Bible study, and Dible’s church was no exception. When the president of William Jewell College, Dr. David Jones Evans, stepped down from his presidency to pastor First Baptist Church of Kansas City, he recruited Dible to lead the church’s Business Men’s Bible Class. Starting at just 35 members, Dible brought the class membership into the thousands. Once the class hit 2,500 people per week, it became so large that the church built a separate wing that was bigger than their sanctuary just to accommodate the Bible study.

In 1922, the study had a surge of members, bringing their numbers to 3,700. Excited about how many men were showing up for the Bible study, Dible researched to see if there were any businessmen’s Bible studies bigger than theirs. He found one group larger in Long Beach, California. In a friendly, competitive spirit, he wrote the Long Beach Bible study a letter saying Kansas City would take away their title the next year.

Dible organized the study into a military model, with captains and lieutenants over groups of 50 and 100. He rallied men together to become the largest Bible study. One Sunday morning in 1923, over 52,000 men in suits flooded the streets of Kansas City with a banner over their heads that read, “Business Men’s Bible Class.” On the day of the event, seventy-five buglers rode through the city, sounding the call. The mayor of Independence came, as well as Missouri Governor Arthur Hyde.

At the time, the city’s entire population was 324,000 people. This means that over 15 percent of the city showed up for the rally. The rally was on a Sunday morning, and presumably the majority of churches in town participated. After this one-time rally, the study returned to its regular attendance of 2,500–3,000 people. It continued for approximately the next ten years, into 1930. During this era, the Pendergast Machine held Kansas City under mob rule. After the rally, the men’s Bible classes played an active role in fighting corruption throughout the city. Read the full story in The Spiritual Roots of Kansas City. First Baptist Church of Kansas City continues today, located at the corner of Wornall Road and Red Bridge Road.

–Annika Bergen serves as director of communication for The Signatory, (thesignatry.com/KCRoots) a global Christian foundation headquartered in Kansas City. The Signatry helps families leave a lasting legacy through creative generosity. Annika and Bill High coauthored The Spiritual Roots of Kansas City: Discovering the Past to Shape Our Future.

Metro Voice is an Amazon Affiliate  Learn more about the book below.

Previous: As the British attack, Francis Scott Key writes Star Spangled Banner
Next: James goes to school as a boy, despite mother’s bid to transition him