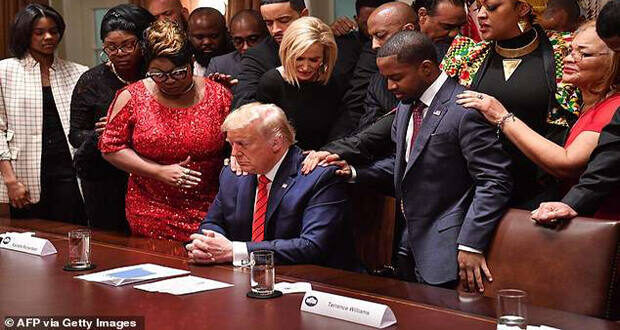 Christian leaders pray for Trump in the Oval Office in 2020.

Former President Donald Trump is criticizing evangelical leaders for not yet endorsing him for the 2024 Republican presidential nomination.

Many evangelical leaders solidly backed him in 2016 and 2020, this time around they largely have remained silent. Pastor Robert Jeffress, a longtime friend and evangelical ally of Trump, said he will wait to see how the Republican nomination contest moves along. Others, such as past supporters James Robison and Mike Evans, have been somewhat critical of him.

“I put three Supreme Court justices who all voted, and they got something they’ve been fighting for many, many years,” Trump said. “Nobody thought they could win it. They won — Roe v. Wade — they won. They finally won.”

Trump made clear that if pro-life candidates for public office run on a platform of no exceptions for abortion, it won’t be a winning formula. “If you don’t have it, I think it’s very, very hard frankly to get elected,” he said. “With that being said, you have to go with your heart. You have to go with what you feel.”

He pointed out that Ronald Reagan also supported abortion exceptions, and he made clear that, despite a pro-life viewpoint of no exceptions, the Democrats are the extremists on abortion. “I think they’re the radicals,” Trump said.

“There’s no path to the nomination without winning the evangelical vote. Nobody knows that better than President Trump because, to the surprise of almost everyone, he won their support in 2016,” says Ralph Reed, executive director of the Faith & Freedom Coalition.

“He’s going to get a very fair hearing from voters of faith. But this will be a contested primary with a lot of pro-life candidates and all of them will get to make their case,” Reed says. “No one should assume the evangelical vote is spoken for or foreclosed to them.”

Recent polls find that the former president remains popular with Republicans but his support is the lowest it has been since he made the famous ride down the escalator at Trump Tower in New York. Still, a majority of Republican respondents(70%) view him favorably as of December 2022 (down from 77% in July).

In a hypothetical primary race between Trump and DeSantis, the numbers are much closer with DeSantis gaining ground. Fifty-five percent favor Trump while 45% said they would support DeSantis.