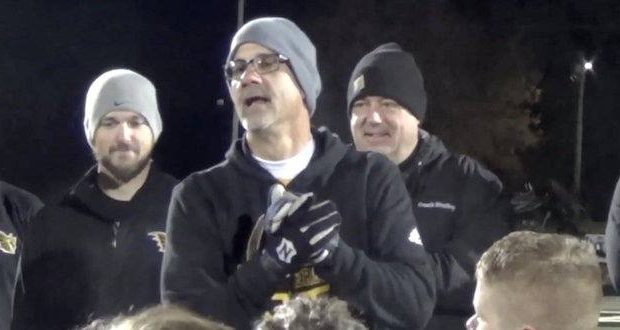 Cameron, Mo., football coach under fire for prayers at games

Another football team is under scrutiny for its coach-led prayers.

The Freedom From Religion Foundation (FFRF) said it received a complaint from someone in the Cameron, Mo., community concerning the alleged actions by head football coach Jeff Wallace and assistant coach David Stucky. Cameron is about 50 miles northeast of Kansas City.

“Coaches were praying with players, reading Bible verses,” said Chris Line, a FFRF staff attorney. “We also understand they were sometimes bringing in outside preachers to talk to players.”

The coaches reportedly have been holding prayer sessions on the 50-yard line after games. Line claimed that school-sponsored prayers violate the First Amendment. “It is illegal for public school athletic coaches to be leading their team in religious prayer and religious worship,” he said..

The foundation sent a letter to the school district on Oct. 28, urging Superintendent Matt Robinson to take immediate action to stop all school-sponsored prayers. Robinson sent the following statement to FOX4, addressing the district’s response to the letter:

“The district will be performing an investigation into the allegations and concerns raised by the FFRF, pursuant to district’s non-discrimination policy and policy regarding religious expression, to determine whether district policy has been violated. The district will also take immediate interim measures to protect students from further possible violations of district policy. No local complaints were brought to the attention of administration of the school district.”

Morgan Gitthens, a Cameron resident, called the coaches’ actions harmless. “I don’t believe in pushing everybody’s beliefs on each other,” she said. “But if they want to pray and the students are good with it, then why not?”

Time will tell if the school district will stand by the voluntary football prayers or if another threat of lawsuit will end them.

Previous: Actress Patricia Heaton cautions Kanye West about challenges of living out faith in Hollywood
Next: Graham warns on impeachment if ‘witness’ kept from public