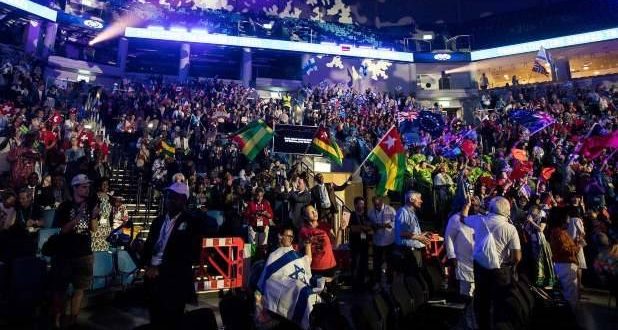 ‘Fulfillment of prophecy,’ say Christians in Israel celebrating the Feast of Tabernacles

Tens of thousands of Christians from around the world are in Israel this week as Jews celebrate the biblical feast of Sukkot. Many of the Christian believers have come to see prophecy fulfilled and attend the Feast of Tabernacles celebration.

It is a gala event with deep spiritual significance.

“It’s the fulfillment of Zechariah chapter 14, yes, it was wonderful, wonderful. We have to come. Gentile Christians should come to Jerusalem at the feast of Sukkot,” John Lui of North Carolina told CBN News.

This is the 40th Feast of Tabernacles celebration of the International Christian Embassy Jerusalem (ICEJ). Some 5,000 Christians from 100 nations have come up to Jerusalem to stand with Israel and celebrate this biblical event. Tens of thousands more have come on their own to celebrate with other groups or in their own way.

“A lot of people from all these little pacific islands – Cook Islands and Samoa, Fiji and all, large, large groups that are flying for like 18 hours to get here. We had a special delegation this year from Egypt at the feast of tabernacles in Jerusalem,” ICEJ spokesperson David Parsons said.

ICEJ also celebrated the work it is doing in helping thousands of Jews immigrate to Israel.

“From the founding of the Christian embassy 40 years ago, we became involved in aliyah work, helping gather the Jewish people back here to the land of Israel and as of now, as of today, we have helped 150,000 Jews to make Aliyah, to help them make the journey home to the land of Israel,” said Parsons.

One of the many people the ICEJ has helped is a young doctor named Daniel, who came with his wife Anna and two children from Ukraine. He is the 150,00 new immigrant assisted by the ICEJ.

“I really have a hope that my family will find here a good future. They will have a good education and I’m really thankful so much for everyone who helped us,” Anna stated. “I’m talking now about, not only about [money], not only about some food. It’s also about moral support.”

Christians come to the event because they feel a Divine call to celebrate the feast in the Holy Land.

“I come here and I bring my family here for the blessing,” said Reidun Kristoffersen of Norway. “For the blessing of God. And here I feel the spirit be new power…So here I found new power. And I go home with new power.”

Piotr Wolochowicz of Family Life Mission in Poland says he attends the celebration because “I love God and because I love Israel.”

“I’m so blessed to step on this soil. I’ve been praying for Israel. I’ve got a women’s group, a women’s organization that will intercede for Israel…the peace of Israel,” said Anna from Liberia.

As part of the Tabernacles feast, the pilgrims join a festive parade in the streets of Jerusalem.

“Why are we here? To show our love for Israel. We support Israel. We are behind you. We believe that God blesses those who bless Israel and so our heart is for you because our heart is for God and we want to see Israel, all of Israel blessed, living in peace,” said John of Hawaii.

A participant named Katy from Ireland believes more Christians are starting to understand the importance of visiting Israel.

“We believe that more and more Christians are going to come to understand that they need to support Israel and not believe the lies and so it says you bless Israel, you’ll be blessed. We believe our land, Ireland is being blessed today because we’re blessing Israel,” she said.

One Israeli said their support is like a big hug.

“I think it’s amazing. It’s the fulfillment of prophecy. And we don’t miss it for anything. Every year we come with our kids and we stand here for hours seeing everyone parade down. It’s beautiful, it’s colorful. It’s happy. Everyone are singing Israeli songs, songs about Jerusalem,” they said.

Another Israeli named David is happy to know that there are so many Christians around the world celebrating the Jewish State.

“I think it’s very exciting to know that there’s so many people that love us and excited to be here in Israel just as I’m excited to be here and this is a fantastic way to show the partnership between us and the rest of the world,” he said.

Previous: Ronald Reagan Presidential Foundation shares his legacy of faith with a new generation
Next: Alternate Endings documentary: How do you want to die?