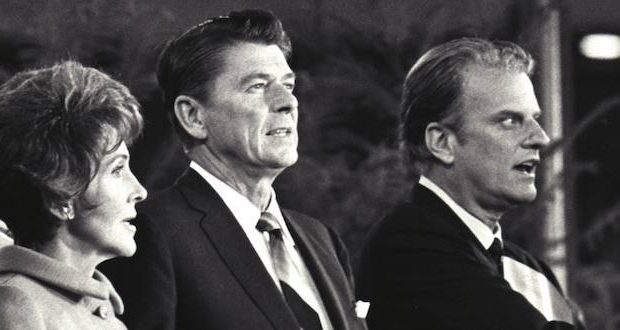 Nancy and Ronald Reagan with Billy Graham years before the Reagans entered the White House.

President Ronald Reagan had a favorite quote inscribed on a plaque that he kept on his desk it the Oval Office: “There is no limit to the amount of good you can do if you don’t care who gets the credit.”

The wisdom in that quote has never been more needed than in today’s hyperpolarized political environment. No wonder scholars continue to discuss and write about Reagan’s legacy and visitors have made the Ronald Reagan Presidential Library the most-visited presidential library in the nation.

Christians also remember Reagan for his unwavering faith in the face of a hostile media and the ever-present threats of the Cold War. Not to mention an assassination attempt.

“Faith is a very big part of who President Reagan was,” said Mark Pankey, director of major gifts for the Ronald Reagan Presidential Foundation & Institute “He relied strongly upon his faith. You can see throughout the library how he put his faith into his presidency, his life and the work that he and Mrs. Reagan did.”

Pankey was in Kansas City earlier this week to meet with supporters and promote the organization’s ongoing work. According to its website:

“The foundation was founded before President Reagan left office,” Pankey said. “He picked out the piece of property and started building up the foundation to help preserve his legacy and help finish his unfinished business. The foundation is the entity that helps fund the library and the institute that is coming soon in Washington, D.C. We want people to be proud of their country, have economic freedom and work toward democracy, and show people the conservative values that President Reagan had that help people move forward.”

“We do a lot of different things with our funds,” he said. “Unrestricted money helps us preserve the library, the Air Force One pavilion and different artifacts that we have. It also helps us bring in special events such as the Lost Cities of Egypt exhibit going on right now. We also have a huge education program.”

Education is a major focus.

“In the summertime, we have an eight-week student leadership program, with 200 different students every week,” Pankey told the Metro Voice. “They learn what it’s like to be president and go through a simulation of some catastrophe that has happened. On the East Coast in the Reagan Institute, we have a leadership program called Reagan and the American Presidency. College students come to the institute and for college credit, they learn about what it’s like to be a president in today’s age.”

At a time when presidential candidates are promoting big government as the solution to every problem, the foundation reminds people that Regan often saw government itself as the problem.

“We are finding there is a lot of misinformation about things that happened, and we try to clear that up,” he said. “The big initiative we are undergoing right now is trying to teach people about Reaganomics because of concern about how the country looks at capitalism today. We are trying to implement more programs about Reagan’s economic policies so people can understand the benefits of capitalism.”

Pankey encourages Reagan supporters to consider contributing to the foundation in their giving and estate planning. Expert assistance is available to help with tax planning.

“You can be an annual supporter, and there also are people who want to do something more significant and make a larger investment in Regan’s legacy,” he said. “We have a program called the legacy council for people who may not be able to make a cash contribution now but want to do so in their estate plan. We can help them tie their legacy to President Reagan’s legacy through an estate plan or an outright gift.”

Thanks to supporters, Reagan’s optimistic message of faith and country will live on.

“What we can learn from President Reagan is that he worked with both sides of the aisle, because he wanted what is best for this country,” Pankey said. “Regardless of your political affiliation, he wanted to do what was best for this country. President Reagan was willing to work with other people who might not have believed exactly what he did. He found a way for them to come together.”

“If you believe in what this country has to offer and the benefits it can give to people who work hard, President Reagan would be proud to have you support his legacy, because there’s many things he wanted to get done that we are trying to accomplish now.”

Previous: Christians continue to disagree about whether and how to celebrate Halloween
Next: ‘Fulfillment of prophecy,’ say Christians in Israel celebrating the Feast of Tabernacles