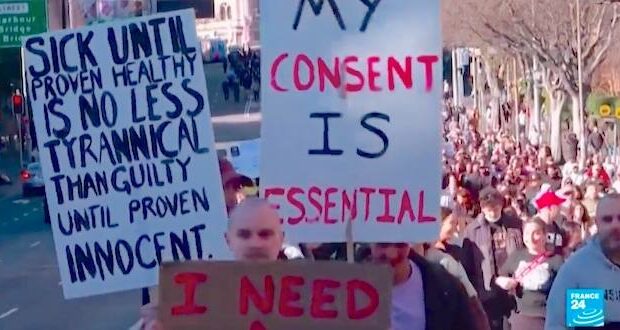 Thousands filled the streets in Sydney over recent lockdown orders.

The Australian Capital Territory (ACT) entered a snap lockdown Aug. 12, after just one positive Covid virus case was detected. The move is being called draconian as the public and some health officials describe it as a dangerous overreaction and protests continue.

Three additional cases were reported in the Australian capital city of Canberra after the lockdown announcement. If confirmed, that would be a total of just four active cases in a population of 450,000 residents that elicited the lockdown.

Australian authorities are investigating the source of the positive case’s infection, a man in his 20s, who was active in the community during the infectious period.

Chief Minister Andrew Barr described it as “the most serious public health risk” in the jurisdiction, which is home to the nation’s capital, has faced this year. “This is why we’ll be introducing a strict lockdown in response,” he told reporters in Canberra on Aug. 12.

“This is the best path to pursue, to protect the health of the community and to avoid even more damaging and prolonged lockdowns and more significant economic consequences for our community,” he added.

The seven-day lockdown will be the second for the region since March 2020.

“During this time Canberrans, are being asked to only leave their homes for essential reasons—essential employment, healthcare (including a COVID-19 vaccination), essential groceries and supplies and up to one hour of outdoor exercise,” an ACT government statement read.

“General retail will be closed, and hospitality venues will only be able to operate takeaway services. We will be asking any businesses that have to remain open to actively prevent any browsing in their stores.”

Barr warned residents against “going to Bunnings to browse” or “hang around the local shops,” urging them to instead, “get in, get what you need, then leave.”The objective of this is to reduce the movement of people who might potentially carry the virus, he said.

Mask wearing will also become mandatory when the lockdown starts.

Australia’s major cities, like Sydney, are under what residents call a military occupation. Over three hundred Australian military personnel are stopping people on the streets and checking their papers to be out of their homes.

Over the last four weeks, tens of  thousands of Australians have protested the lockdown measures with hundreds arrested.

Thousands gathered in Sydney alone, with smaller protests held in Melbourne and Brisbane. Even small communities have seen average citizens take to the streets to protest what they consider a gross loss of freedoms.

In one widely televised protest, people chanted “freedom” as they marched through the center of Sydney. Officers said they had made 57 arrests in that protest alone.

According to Johns Hopkins, the country of 25 million has recorded just 950 Covid deaths out of just over 32,000 cases.