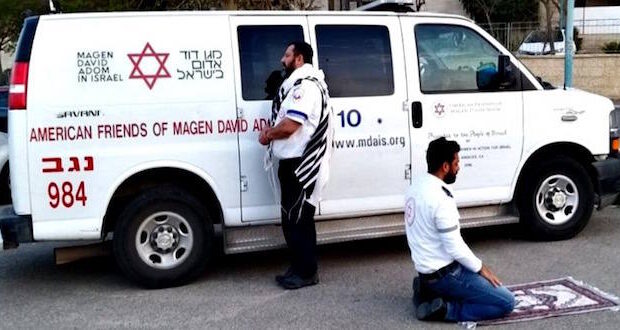 An image of two EMTs is going viral after it was snapped in Israel. The photo, captured on Wednesday,  caught the remarkable sight of two emergency workers — one a Jew, the other a Muslim — standing alongside their ambulance vehicle and praying in their respective traditions.

The image was shared by Nir Dvori, a journalist with Israel’s Channel 2 broadcaster.

“It’s possible,” Dvori commented in Hebrew above the image.

READ: Israel will use military to go on total lockdown

The photograph of the EMTs caught the attention of pro-Israel social media influencers, several of whom commented that there was no better depiction of the country’s democratic and multi-ethnic character.

“Caught on camera,” tweeted retired Israeli diplomat Daniel Carmon — who was originally sent the photo through a group on WhatsApp that he belongs to — “a praying interlude in the midst of a hectic day by #Jewish and #Muslim @Mdais paramedics who will later continue fighting #CoronaVirus together. Touching photo, isn’t it?”

Responding to another user who commented that “the Muslim probably hates the Jewish dude,” Carmon said that assessment could not be more wrong.

Israel is going on complete lockdown this week in response to the coronavirus pandemic.