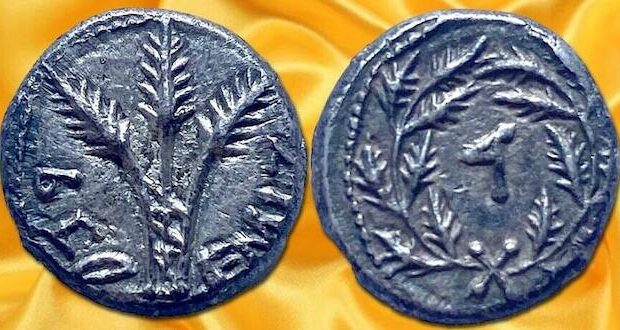 The two faces of the Year Four Quarter Shekel, minted in 69 C.E. during the Great Jewish Revolt against the Roman Empire. Credit: Israel Antiquities Authority.

JERUSALEM—American authorities have returned a rare, 2,000-year-old Jewish coin to Israel nearly two decades after it was looted, smuggled and put up for auction in the United States, Israel’s antiquities authority announced Tuesday.

The quarter shekel silver coin, minted in the year 69 – just decades after the resurrection of Jesus – is one of just two confirmed to exist. The other has been in the British Museum’s collection for a century.

It was minted during the fourth year of the First Jewish Revolt against ancient Rome in the first century A.D. Several other examples of the coin are believed to be in private collectors’ hands. After the revolt was defeated by the Roman military, Israel was renamed “Palestine” as an insult to its Jewish inhabitants. The inhabitants of the region who were not murdered by Rome became known as “Palestinians” and included Jews, Christians, and later in the 6th century AD – Muslims. When Israel again gained independence and reclaimed its ancestral land, its inhabitants became known as “Israelis” although Muslims kept the Palestinian name.

While other types of coins struck by Jewish rebels during the revolt are more common, this denomination of small silver coinage is “super rare,” said Eitan Klein of the Israel Antiquities Authorities theft prevention unit. Because there are fewer than three known examples, it is legally regarded as an artifact of “national and scientific significance,” he said.

READ: Tour Israel with other readers of Metro Voice

The Manhattan District Attorney’s Office, which separately announced the agreement with Israel on Monday, estimated the coin’s value at $1 million.

The revolt was the first of several major Jewish uprisings against Rome that lasted from 66 to 73, and included the destruction of Jerusalem and the ancient Jewish Temple in the year 70.

According to the antiquities authority, the coin was one of a hoard stolen by Palestinian looters from the Elah Valley west of Jerusalem—site of the Biblical battle between David and Goliath—in 2002. It was then smuggled to Jordan and on to Britain, where it received false documentation and was sent on to the United States.

It was slated to be sold at an auction in August 2017 but was seized by Homeland Security agents before it went on the block.

The Manhattan District Attorney’s Office, which has been involved in several high-profile cases of illegally trafficked antiquities in recent years, took over the case earlier this year.

The artifact was handed over to Israeli officials in a ceremony in New York. The Israel Antiquities Authority intends to exhibit the coin at its new headquarters, which are still under construction.

Col. Matthew Bogdanos, chief of the Israeli Antiquities Trafficking Unit, said, “Today’s repatriation to Israel of this extraordinary coin represents a cherished piece of history finally going home. But it also represents an equally extraordinary partnership between New York’s Antiquities Trafficking Unit and the Israeli Antiquities Authority. It is a partnership that should be used as a model in recovering pillaged cultural heritage around the world.”

Previous: The private and public faith of Queen Elizabeth II
Next: One of Wahlberg brothers found his faith while locked in prison