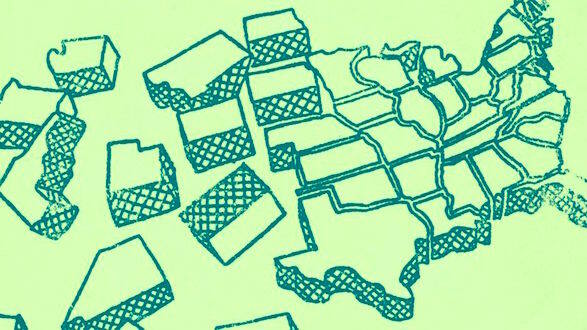 Survey finds that many Americans support possibility of secession

President Joe Biden came into office saying he wanted to unify the nation but a new poll shows polarization growing. Three in 10 Americans now support the concept of dissolving the country into like-minded regions through a policy of secession.

“Until recently, we would have regarded it as too marginal to include in a survey,” the researchers said. “But state legislators in Mississippi and Texas and state GOP leaders in Texas and Wyoming have openly advocated secession in recent months.”

And it’s not just one side of the political aisle upset with new policies coming out of Washington.

Independents, not Republicans, lead the way in calling for breaking up the U.S. into regions with 37 percent supporting the idea.  Next are Republicans at 35 percent. Even 1 in 5 Democrats support the idea at a surprising 21 percent.

The survey also revealed voters in both major parties support the proposal of a new COVID-19 relief bill.

Overall, Americans would like to see another distribution of stimulus checks to offset the financial crisis felt by the economy due to COVID restrictions. Researchers studied how Americans view a politician who advocates $500 billion in pandemic relief compared to one who objects to it. Republican voters chose the politician who supports COVID relief funds by 11 points, independents by 12 points and Democrats by 18 points.

But surveys also show that voters don’t actually know what’s in the bill or that just 9 percent goes to true Covid relief. The national media has focused primarily on Covid vaccine and front-line aspects of the bill rather than the pork-barrel spending.

As for the 2020 election, considerable doubt remains.

“In a democracy, people basically have to trust that the rules are fair and that if their party or their team loses, the stakes of that loss won’t be intolerable, that in the future they’ll be able to contest an election again and that they’ll have a chance of winning,” said Gretchen Helmke from the University of Rochester. “That keeps everyone committed to democracy and to playing by the rules. Once you break that faith — that elections actually determine who the winner is — people’s allegiance to democracy wanes.”