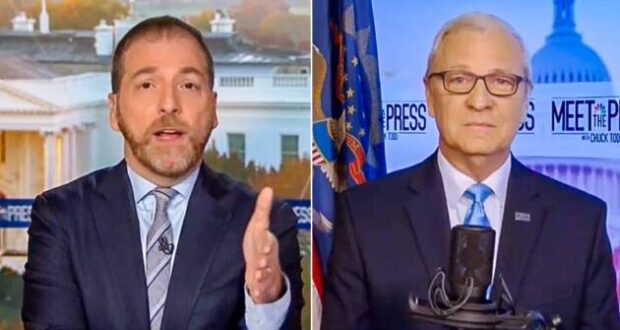 U.S. Senator Kevin Cramer (R-ND) is defending the Trump campaign’s election litigation saying it is appropriate and following a constitutional process. Several lawsuits are making their way through the courts on the way to the Supreme Court, as our recounts after millions of questionable ballots were allegedly “dumped” in the late hours of election night after counting officially stopped.

“These are processes that are in our Constitution, in our laws, and they’re not just appropriate, but they’re really an obligation, frankly, to the millions of Americans that President Trump is a reflection of. I know, you know, a lot of people like to think that we’re the reflection of him. He’s the reflection of millions of people that want to see him fight this to the end,” Cramer said during an appearance on NBC’s “Meet the Press.”

READ: Here’s where all the battleground states stand

“I think everyone ought to calm down a little bit. I don’t see this as an attack on our democracy. I mean, we spent four years listening to news shows and liberals discrediting, trying to discredit the Trump administration to the point of spying on him by the last administration. Forty million dollars spent on an independent counsel that started with no evidence and ended proving that there was no evidence. And then, of course, this crazy impeachment. So, I think what we’re experiencing now, everyone ought to just relax and let it play out in the legal way. We’ll be just fine,” he added.

Media outlets and some lawmakers, primarily Democrats, have tried pressuring Trump into conceding to challenger Democratic presidential nominee Joe Biden, even as Trump’s campaign and others battle in court to contest results in key battleground states, asserting Trump actually won some states where Biden is ahead.

Trump’s campaign has alleged election fraud. Some of the lawsuits include affidavits from poll workers and observers attesting under the penalty of perjury to witnessed fraud.

“What they’re claiming is that there’s a lot of evidence, and they’re presenting that evidence in cases. Now it’s up to them to present that evidence … And we’ve yet to see a real hearing where evidence was presented. And they’re not obligated to present it, you know, yesterday or tomorrow, although the sooner the better from my perspective,” Cramer told host Chuck Todd.

“I think that to have this process is just fine. And who knows? Remember, we’ve also never in history—in this century or any other century—had a massive vote by mail, you know, balloting where there was things like ballot harvesting and ballot curing, things that we’ve never even heard of before that were taking place,” he continued.

“And frankly, a much, much lower rejection rate of mail-in ballots than just four years ago when there were many fewer of them. So it’s okay to go through this process, make sure it’s being done right, make sure that it never happens again if there are irregularities.

Previous: Award-winning Broadway actor under fire for challenging state’s COVID-19 restrictions
Next: Ban on gay therapy overturned by US Court of Appeals