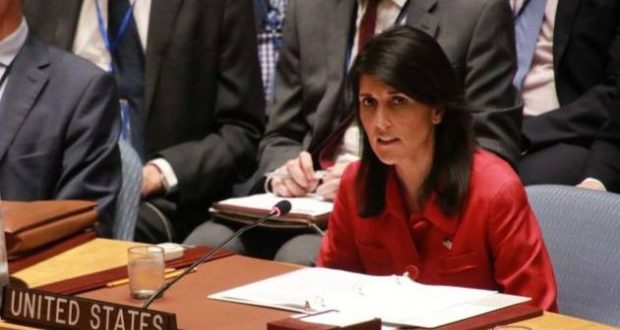 US pushes for UN to condemn Hamas terrorist attacks on Israel

U.S. Ambassador Nikki Haley is set to confront the anti-Semitism of the U.N. General Assembly again today as it votes on a United States-sponsored resolution that condemns Gaza’s ruling Hamas terror organization for its attacks on Israel with 400 missiles recently and its misuse of civilian resources for military purposes.

The resolution also demands an end to the violence perpetrated by Hamas and other Gaza terrorist groups, such as the Palestinian Islamic Jihad terror organization.

So far, the European Union has said it will support the resolution, according to a report published by The Tower.

But the vote, to be held in the General Assembly Thursday afternoon, could easily fail, particularly as Palestinians and their allies seek to scupper the push at the final turn. Kuwait’s ambassador told reporters Thursday that the Arab group, of which he is this month’s chairman, will ask for a requirement that two-thirds of members vote in favor for the resolution to pass (it would normally require a simple majority). Such a high bar could doom the resolution.

A U.N. diplomat said that a second pro-Palestinian amendment sponsored by Ireland could be brought to the chamber as part of an attempt by the European Union to reach an overall solution to provide “balance” and ensure countries can vote for both resolutions. That resolution would call for a “just and lasting peace in the Middle East” and include a call for “an end to the Israeli occupation that began in 1967…”

The struggle to muster the votes itself fuels the U.S. and Israel’s argument that the body is uniquely anti-Israel as it struggles to condemn a terrorist group by name, while regularly passing resolutions that criticize Israel. The U.S. has made the argument that the U.N. is biased against Israel for years, but has intensified that argument during the Trump administration.

The resolution is expected to be the final gesture of support for Israel by outgoing U.S. Ambassador Nikki Haley.