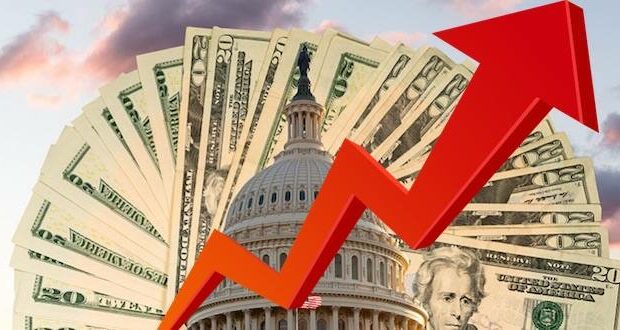 What the proposed $6 trillion Biden budget means for your future

History will not remember President Biden for his frugality but it may for his budget.

The president has already signed into law a massive multi-trillion-dollar “COVID” stimulus spending package and proposed trillions more in “infrastructure” spending. Now, the White House has released its budget request for Fiscal Year 2022—a stunning $6 trillion.

“President Biden will propose a $6 trillion budget on Friday that would take the United States to its highest sustained levels of federal spending since World War II, while running deficits above $1.3 trillion throughout the next decade.” That’s not the assessment of a right-wing cable network, but what the New York Times reports.

President Biden will propose a $6 trillion budget that would take the United States to its highest sustained levels of federal spending since World War II, while running deficits above $1.3 trillion throughout the next decade. https://t.co/A5HAPSs4R1

These enormous spending levels would lead to skyrocketing budget deficits.

“The federal budget deficit would hit $1.8 trillion in 2022, even as the economy rebounds from the pandemic recession to grow at what the administration predicts would be its fastest annual pace since the early 1980s,” the Times continues. “It would recede slightly in the following years before growing again to nearly $1.6 trillion by 2031.”

“Total debt held by the public would more than exceed the annual value of economic output, rising to 117 percent of the size of the economy in 2031,” the report adds. “By 2024, debt as a share of the economy would rise to its highest level in American history, eclipsing its World War II-era record.”

Simply put, the president wants to spend an astounding amount of our money. And he does this without including many of the high-priced promises he made during the 2020 campaign. There’s no student debt relief; no prescription benefit; no Medicare for all: All of which could have easily cost an additional $1 trillion per year.

Of course, with figures this big and every president in recent history having spent recklessly, it’s understandable that the significance of such spending levels can easily be lost on weary Americans. So to break it down, here are three glaring consequences that everyday Americans will face in their lives if Biden’s proposed blowout budget becomes reality.

1. Trillions More in Taxes—Just to Cover the Interest

Every year, the federal government takes in huge sums in taxes just to cover the annual interest payments on the national debt. These annual payments—just the interest on the debt—would double over the next decade under Biden’s proposal. Even if interest rates stay low, the payments will total trillions in the near future that will require tax increases. And if interest rates do tick up, these annual payments will quickly become unimaginably large.

Your wallet will feel it.

Large levels of government debt drag down the economic growth that improves our living standards. It directly lowers your paycheck, too. For example, according to the nonpartisan Committee for a Responsible Federal Budget, “A generic plan to gradually reduce the [national] debt to its historic average would… increase income per person by $5,500.”

3. Large Misallocation of Resources that Could Eventually Lead to a Crash

Since the government can’t create wealth out of thin air, the resources it spends have to come from somewhere else. Biden’s proposed $6 trillion in spending is no exception.

“There is [going to be] a time in which people wake up and say ‘the emperor has no clothes." – @RandPaul https://t.co/TGY9XFuiTW

Massive money printing also leads to a vast misallocation of resources, as Senator Rand Paul recently remarked.  Not only does money pumping raise the overall price level, but it also misleads businesses into making unsustainable investments. As taught by economic theory, this inevitably leads to a corrective crash in the economy—the brunt of which will be borne by average Americans.

The issue with President Biden’s record-breaking budget proposal is more than just our inability to afford it. Such a drastic acceleration in government spending would hurt the financial prospects of everyday Americans in too many ways to count.

The Foundation for Economic Education (FEE) is a 501(c)3 educational foundation and has been trusted by parents and teachers since 1946 to captivate and inspire tomorrow’s leaders with sound economic principles and the entrepreneurial spirit with free online courses, top-rated in-person seminars, free books for classrooms, as well as relevant and worldly daily online content.

Previous: How ‘Katie’ came to be sex-trafficked and what your church can do
Next: Congresswoman Vicky Hartzler running for US Senate