Home / News / Columns / Why Christians need to vote on Nov. 8 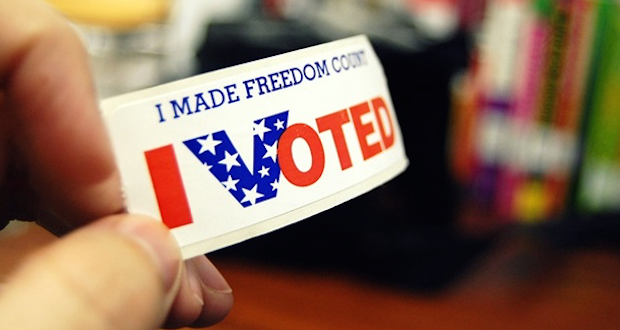 Why Christians need to vote on Nov. 8

“Do you know what is the greatest political seduction of all?” James and Betty Robison asked me in a recent television interview, “It is when Christians completely drop out of the political process and don’t vote at all.”

With the midterms upon us, this is a mistake we cannot afford to make.

If we sit out the political process entirely, be it because of the worldliness of the system or because we didn’t get our favorite candidate or because of our “heavenly calling,” we have no one to blame when things turn in a worse direction. We, on our part, did nothing to stop it. We abdicated our privilege and our responsibility.

I addressed this in my book Political Seduction, emphasizing that “there is no question that Christians should be involved in politics, since we are called to be the salt of the earth and the light of the world.”

As God’s people living in this world, we are called to set a standard of morality and equity and compassion and kindness and justice.

As expressed by Dr. Martin Luther King, “There was a time when the church was very powerful, in the time when the early Christians rejoiced at being deemed worthy to suffer for what they believed. In those days the church was not merely a thermometer that recorded the ideas and principles of popular opinion; it was a thermostat that transformed the mores of society.”

To quote King again, “The church must be reminded that it is not the master or the servant of the state, but rather the conscience of the state. It must be the guide and the critic of the state, and never its tool. If the church does not recapture its prophetic zeal, it will become an irrelevant social club without moral or spiritual authority.”

This is a high and lofty calling, one that we often miss, going to one extreme or the other.

At other times, we get so fed up with the politics of this world that we simply abandon the political scene entirely.

That, too, is a grave mistake. If we abandon politics, someone else will fill the void that we left, someone with a very different agenda than our own. This will mean suffering and pain and destruction for the nation.

And when we live in a Democratic Republic like the United States, if we give up our right to vote, we hand the nation over to those who differ with, if not despise, our values. As a result, we will ultimately forfeit our right to preach the Gospel and to live by biblical values, even in our own homes and schools and congregations.

Of course there is an unhealthy marriage between politics and the gospel, and that is a major focus of my book.

It is a grave error to marry the gospel with politics but is is also a deadly error to abandon the political system entirely.

But if we keep our priorities straight, which means the gospel first, and then politics, also shining the light of the gospel into the political realm, we can see America changed.

I encourage to seek God in prayer and to study His Word, to share the gospel with your friends and co-workers, to pursue godliness and righteousness in every area of life – and to get informed and to vote.

Together, we make a massive difference. Even when we vote.

As an affiliate, Metro Voice may be supported financially by Amazon by your shopping.