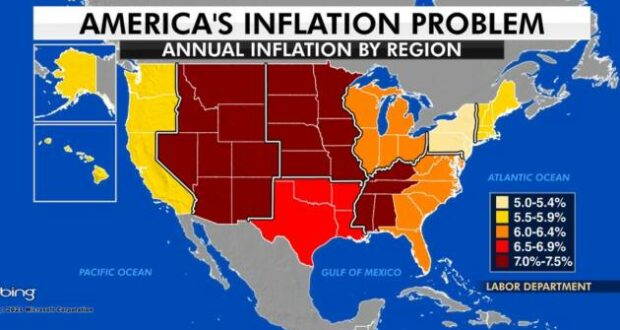 Americans expect steep inflation to continue, according to the latest Survey of Consumer Expectations recently released by the Federal Reserve Bank of New York.

The median expectation is that the inflation rate will be up 5.7 percent one year from now, a 0.4 percentage point jump from the previous month, which also marks the highest level for the gauge since its launch in June 2013. The October increase marks the 12th consecutive increase and was most pronounced among respondents who have at least a college degree and for people between the ages of 40 and 60.”

“Median inflation uncertainty — or the uncertainty expressed regarding future inflation outcomes — increased at both the short- and medium-term horizons,” the survey report said. “Both measures reached series highs in October.”

Americans look set to pay steeper rents, with the median expected change in the cost of rent increasing by 0.4 percentage points to 10.1 percent, marking a new series high. Meanwhile, gas prices also are set to rise, with the one-year expected change in the cost of petroleum rebounding to 9.4 percent in October from 5.9 percent the previous month. Prices are up 50 percent since President Biden took office in January.

The cost of college education and food also are expected to rise in the year ahead, with the survey noting the median expectation for prices there jumping by 1.5 and 2.1 percentage points, respectively, to 7.4 percent and 9.1 percent in October.

“Inflation is elevated and will likely remain so in coming months before moderating,” Federal Reserve Chairman Jerome Powell said. “As the economy continues to reopen and spending rebounds, we are seeing upward pressure on prices, particularly because supply bottlenecks in some sectors have limited how quickly production can respond in the near term.

“As the reopening continues, bottlenecks, hiring difficulties and other constraints could again prove to be greater and longer-lasting than anticipated, posing upside risks to inflation. Continued progress on vaccinations would help contain the virus and support a return to more normal economic conditions.”

Inflation is highest in the central and upper midwest.