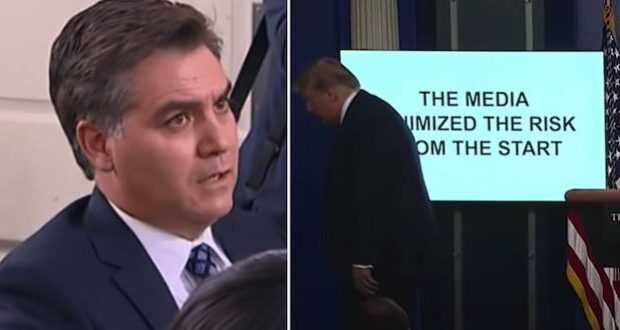 CNN's Jim Acosta squirms as a video begins to play showing the network downplaying the threat of coronavirus in February.

Major news outlets don’t want you to see their reports from January and February that downplayed the threat of coronavirus. CNN and MSNBC cut away from airing President Donald Trump and the daily coronavirus briefing when he began airing a video that highlighted how media outlets attempted to downplay the virus earlier this year.

The video included a series of clips from CNN, Fox News, CBS and other broadcasters.

“The media minimized the risk from the start,” viewers saw, before seeing mainstream news anchors, reporters, and cable pundits claiming the virus was similar to the flu and likely to have little impact on the United States. All the networks shown had gone so far as to say Trump was overreacting when he shut down travel from China, calling his actions “racist.”

Watch the clip below:

The video then highlighted actions the Trump administration has taken in response to the pandemic, including halting most travel from China and Europe, before showing Democrat and Republican governors praising the president.

CNN left the briefing room as Trump started playing the footage then called the video of their own previous news reporting “propaganda.”

“To play a propaganda video at taxpayer expense in the White House briefing room is a new — you can insert your favorite word here in this administration,” CNN anchor John King said on air in explaining the decision.

MSNBC also prevented its viewers from seeing the video.

“We are cutting into what was not a White House coronavirus briefing,” Air Melber, a host, told viewers.

Neither network immediately responded to requests for comment about being held accountable for their own words.

The video montage was “to keep you honest,” Trump told reporters.

“There would be nothing I would be more proud of if the press would work. I do not mind being criticized, but not when they are wrong, not when people have done a great job,” he added.

Trump speaks most days along with the White House Coronavirus Task Force to reporters about updates on the response to the coronavirus. He and the press frequently clash. The president has said he feels he is treated unfairly by reporters, while reporters repeatedly claim he lies and has done a bad job as president.

Even while the briefings continue to get historically high ratings, ABC, CBS, NBC, CNN, and MSNBC began cutting away from portions of them last month.

“If the White House wants to ask for time on the network, they should make an official request. Otherwise, we will make our own editorial decisions,” CNN said in a statement at the time.

CNN was widely criticized for the chyrons, or blocks of texts emblazoned across the bottom of the screen, that it included during the time it did air the briefing on Monday. The network at one point claimed in an explicit show of opinion on what was to be an opinion-free news report: “Angry Trump turns briefing into propaganda session.” Another chyron stated: “Trump melts down in angry response to reports he ignored virus warnings.”

Pictures of the chyrons were shared by a number of CNN reporters.

Trump shared a video on Twitter of Fox News’ Tucker Carlson asserting CNN actually had the meltdown, telling viewers: “Imagine the rage of the 24-year-olds in the chyron booth writing those,” Carlson said. “‘He’s so bad.’ Hilarious,” Carlson said of Trump being able to get under the skin of news media by showing their own previously wrong coronavirus reports.