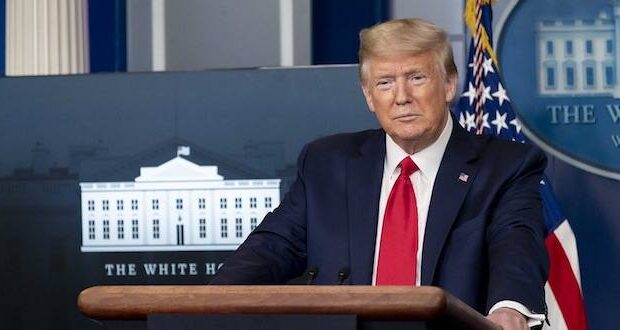 President Trump announces a historic task force that will brainstorm on restarting the economy.

Now that the nation’s coronavirus hotspots have seemingly hit their peak, attention is turning to getting the economy roaring back to life. President Donald Trump on Tuesday said that is now a top priority as he announced a wide-ranging list of advisors for the new historic economy task force. The expertise he’s drawing on comes from all areas of American commerce.

Speaking at the White House, Trump read dozens of names of executives and companies from sectors including technology, agriculture, banking, financial services, defense, energy, transportation, as well as leaders from unions, professional sports, think tanks, and health care, as members of his task force, dubbed the “Great American Economic Revival Industry Groups.” Experts have said the move is historic and has not happened to this extent in the United States.

Trump said that those named on the list were “the best and the smartest, the brightest and they’re going to give us some ideas,” on how to reopen the economy following its virus-induced shutdown.

Shortly after the president’s briefing, the White House released the list of nearly 200 executives, economists, scholars, and industry leaders who together will form various Great American Economic Revival Industry Groups. The groups will “work together with the White House to chart the path forward toward a future of unparalleled American prosperity,” and “produce a more independent, self-sufficient, and resilient nation,” according to a White House press release.

Names among the list include Apple’s Tim Cook, some of the nation’s largest banks, such as Bank of America, Goldman Sachs, and Morgan Stanley, massive defense contractors such as Lockheed Martin and Northrop Grumman, and former Secretary of State Condoleezza Rice and billionaire entrepreneur Mark Cuban, who have both been critical of Trump in the past.

Also during Tuesday’s press conference, the President said that plans to reopen the country were “close to being finalized” and that some governors across the United States can “very, very shortly, if not almost immediately,” open up their states, but said he will announce a specific date soon, adding that the date will be “in the very near future.” Trump said he was aware of “over 20 states” that were in “extremely good shape” and could potentially reopen “before the date of May 1,” while other states will follow.

Trump’s hope to open the economy in May are in contrast to those who are demanding it happen immediately.  Dr. Anthony Fauci cautioned on opening it right away saying we need to be cautious. “We have to have something in place that is efficient and that we can rely on, and we’re not there yet,” Fauci told The Associated Press, before calling the May 1 target date “a bit overly optimistic” for many areas of the country. Trump has explained that the rollout would start in areas of the nation with low infection rates and eventually move to those areas where more cases had been reported but are currently under control.

Fauci said that social-distancing rules in place in much of the country would have to occur on a “rolling” basis, and not all at once.

Previous: Media cuts away from Trump coronavirus briefing when he shows clips of their previous reports
Next: Clemson coach Dabo Swinney says God will be glorified and football will be played