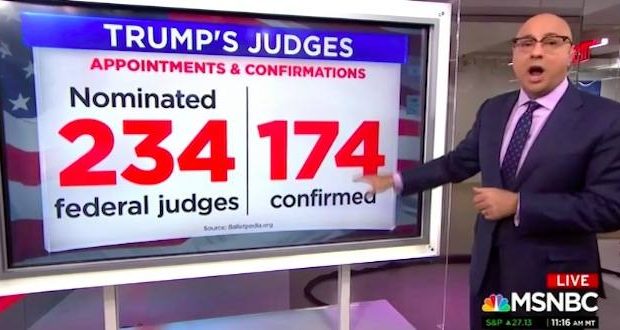 As news networks reflect on the biggest news events of 2019, MSNBC took a look at what conservatives are applauding.  The liberal news outlet highlighted the confirmation of scores of conservative federal judges. The anchors lamented how the confirmations “will affect the laws of the land for years to come” and gave talking points for ways for Democrats to “counter” the GOP success.

“The Trump administration has done more to shape the courts in just one term than any other president in recent history,” anchor Ali Velshi announced at the top of December 16 segment on MSNBC Live With Velshi and Ruhle. He then warned: “It’s a strategy that will affect the laws of the land for years to come.”

The host provided some numbers:

Since taking office, President Trump has nominated a whopping 234 federal judges. 174 of whom have been confirmed….President Trump has named a total of 50 judges to appeal courts, compare that to President Obama’s total of 55 judges to the Appeals Court in the entire eight years at the White House. And at this point in the Obama presidency, he had only confirmed 24 federal Appeals Court judges courts.

After detailing the success of the Trump administration in filling judicial vacancies, Velshi fretted: “Keep in mind, these judges serve lifetime appointments, so their tenure could last decades. And even if President Trump is removed from office or defeated by a Democrat in 2020, his judicial appointees will still hold the power to push a conservative agenda.”

As if that wasn’t enough to scare their liberal viewers, Velshi and co-host Stephanie Ruhle brought on author and attorney Danielle McLaughlin to discuss her book, The Federalist Society: How Conservatives Took the Law Back From Liberals.

Ruhle worried: “It’s extraordinary. I mean, Republicans focus heavily on stacking the courts, many people say it is the greatest achievement of Mitch McConnell or President Trump.” She then implored: “Where do Democrats factor into this? Do they have a counter to the Federalist Society machine?”

After noting how “Trump had a list of Federalist Society-approved nominees,” an exasperated McLaughlin whined: “But, for the life of me, I cannot figure out what Democrats are doing. Literally they’re – I think that they’re just hoping that Ruth Bader Ginsburg survives and that he doesn’t get reelected. There’s no plan for this big problem.”

Ruhle complained: “It is impossible to overstate how much influence Mitch McConnell has over all of this. On Fox News just a few days ago, he was boasting – and he can, right – boasting about how he blocked President Obama’s judicial appointments for years.”

And this idea that Republicans take some gleeful pleasure in messing up the system and messing with the system and stopping a president from really exercising the power that is given to them, you know, fundamentally under the Constitution. They didn’t even bring Merrick Garland up for a vote. They are advice and consent – is obviously a power that the Senate has – but they didn’t even exercise it. So I think that for all they talk about standing by the Constitution and being the party of law and order, in fact, they have been historically obstructionist. And I really think that, as it related to President Obama especially, they didn’t do what the Constitution required them to do.

Trump and Senate Republicans actually fulfilling their obligation to name judges to the federal bench is like a giant lump of coal in the stocking of the liberal media.

Previous: Green Bay Packers get heat for grant to Planned Parenthood
Next: Tofu for Christmas?!